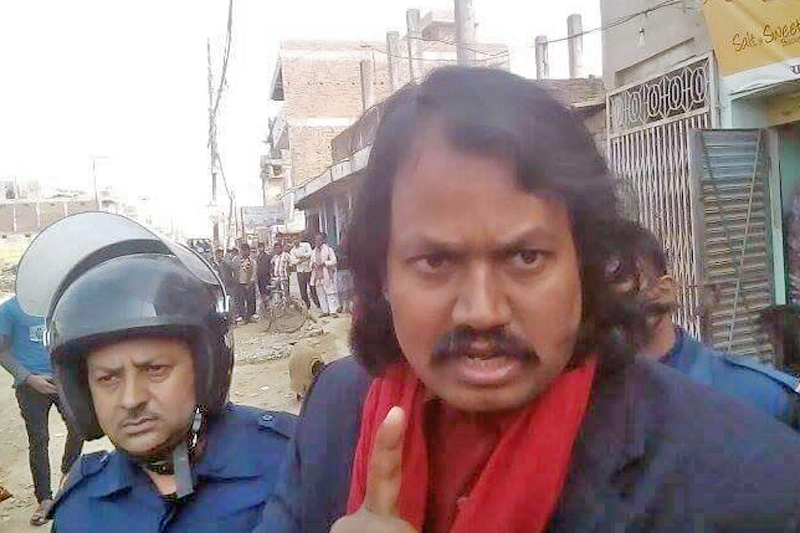 CK Raut reacts after being detained from Janakpur on Thursday, February 2, 2017. Photo: Brijkumar Yadav
RAJBIRAJ: The Siraha District Court on Friday has extended the remand of Free Madhes Alliance Coordinator CK Raut by 10 days. This is the fifth time the district police have received the remand to interrogate the leader accused of carrying out secessionist activities in Madhesh, informed SP Shekhar Koirala of Siraha District Police Office. Police had arrested Raut on the charge of organised crime against the state from Janakpur on February 2. Raut, a permanent resident of Mahadev village in Saptari district, was charged of advocating secession during a mass meeting held at Lahan of Siraha district on January 18. After his arrest, the Court for the first time had allowed police to take him in custody for 10 days followed by two other 10-day remands. He was remanded for other 20 days on March 4. Koirala expressed his confidence that Raut would be indicted at the court within the latest extension as the law enforcers could not extend the remand any longer. Meanwhile, police also arrested a person on the charge of throwing stones at them while Raut was being taken to the Court, informed Koirala. Earlier, Raut was released on bail by the Special Court while he was booked for holding subversive activities. The Crime against State and Punishment Act 1989 has a provision that anyone acting against the sovereignty, geographic integrity and unity could be sentenced with life imprisonment.
#Siraha #Nepal Police #CK Raut #law #court
You May Also like: