Conflict era victims ask when they will get the promised relief 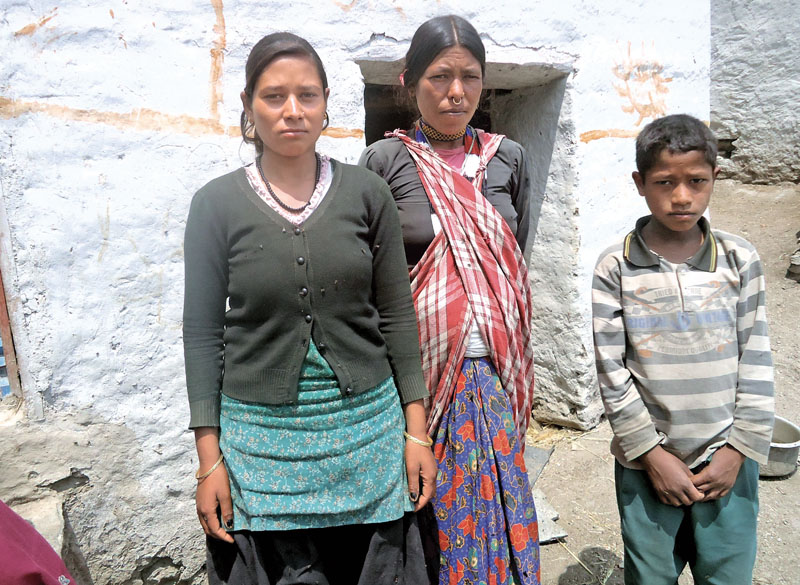 Reuli Sarki, whose husband was killed during the insurgency era by state forces, along with her children in Pandusain VDC, Bajura, on Thursday.
Bajura, August 4 The carnage that took place decades ago is still fresh in the memory of Reuli Sarki of Agaupani Pandusen. It was Dipawali when seven persons; namely, Ramlal Damai, Tula Rawat, Kashi Sarki, Saure Rawat, Nara Bahadur Bohara, Chandra Bohara and Rup Damai were murdered by security forces when they were playing cards at the house of a local Maoist cadre on October 24. According to an INSEC report, the same day local Padam Bahadur Shahi was abducted by state forces while he was harvesting paddy in his field. He was taken to Pandusen, where he was shot dead. Among those murdered by security forces, Kashi is Reuli’s husband. But long after her husband’s murder, Reuli still feels that the state has been apathetic towards healing the wound it gave her by robbing her of the breadwinner of the family. She has been surviving as a daily wage labourer and earning the keeps of her family of five. “We don’t have any means of livelihood and don’t know what to eat the next day. The state has only been a mere spectator to our plight,” she said, adding, “When he (her husband) was there, he used to earn for us anyway, either working day and night here itself or going to India for some job.” All eight families whose male members were killed in the twin incidents face the same level of hardship. Among them, Nara Bahadur’s wife Najana, 43, has been earning for her eight-member family somehow. “As the produce from our field lasts for only two to three months, I’ve been earning my livelihood from collecting herbs and working as a daily wage labourer,” said the woman, wondering when she will get the state-pledged relief of 1 million rupees. Almost all conflict victims lament the lack of relief years after the former Maoist rebels joined mainstream politics. They are also lamenting the lack of action against persons involved in the murders. Most of them had the same question for newly elected Prime Minister Puspa Kamal Dahal: When do we get relief? “We’ve lost our near and dear ones due to the conflict but let alone other parties who hogged the government seat,s even the Maoist party has failed to do anything,” they said. Late Chandra Bohora’s wife Rupa, aged 57, sought action against persons involved in the murder of her husband. “We’ve heard from the radio that Prachanda has become the prime minister once again. Now that he is in that post, he needs to do something to provide us justice,” she demanded. Similarly, the kin of others who were murdered by the then rebel side have also expressed hope that they will get justice now. “As the former rebel leader is in the top executive post, we hope he will do something to provide us justice,” said Baldev Regmi, whose brother Tarachandra was killed by rebels during the insurgency.
#insurgency #Dipawali #carnage #Reuli Sarki #Agaupani Pandusen #Maoist cadre #Puspa Kamal Dahal
You May Also like: