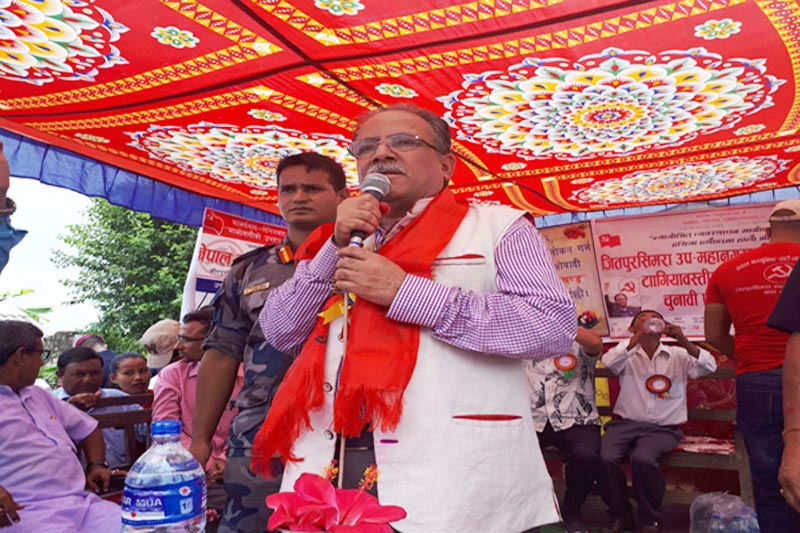 CPN-Maoist Centre Chairman Pushpa Kamal Dahal addressing an election rally in Jitpur-Simara sub-metropolis, Bara, on Sunday, September 3, 2017. Photo: THT
Bara, September 3 CPN-Maoist Centre Chairperson Pushpa Kamal Dahal today said the country was heading towards implementation of the constitution with all three phases of local level elections going to conclude soon. Dahal said the people’s rights that had been confined to Singha Durbar for decades were now in the process of being decentralised to local levels. Speaking at an election publicity campaign at Tagiya of Bara, Dahal described the decision of disgruntled political forces to contest the third phase of local level elections as a great achievement of the incumbent government. The Maoist chairperson also stressed that the statute should be unanimously accepted in order to discourage secessionist forces in the country. On the occasion, locals urged Dahal to make necessary arrangements for rehabilitation of those who would be affected by construction of the proposed international airport in Tagiya. In response, Dahal said he was sensitive to the locals’ concern and pledged that he would do the needful in that regard. Meanwhile, the former prime minister said the proposed airport and Nijgadh-Kathmandu fast-track would substantially transform the district economically. Dahal has been taking part in various election publicity campaigns in Province 2 in recent days for the third round of local level elections slated for September 18.
#Singha Durbar #Pushpa Kamal Dahal #statute implementation #CPN-Maoist Centre Chairperson
You May Also like: