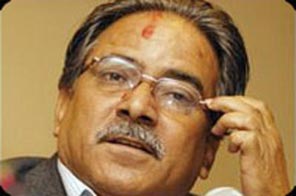 BIRATNAGAR: UCPN-Maoist chairman (Prachanda) today made an alarming revelation that his party would provide weapons to the people to safeguard sovereignty and restore people’s supremacy.
“People’s supremacy cannot be established until the civilian possess weapons,” he said, making a scathing attack on supporters of monarchy, and labelling the outgoing army chief Rookmangad Katawal as ‘murderer’ and a ‘fascist’.
“Our party is not against Katawal but character like him.”
“Katawal is a representative of the feudalist, murderer and autocratic regime ,” he said, adding, “Democracy cannot be institutionalised so long as such characters are active in the country.’’
He was speaking at a programme organised by Kochila Rajya Samiti of Joint People’s Struggle Committee in Biratnagar. An estimated 200,000 supporters assembled on the occasion.
“This is only the trailer of the movement, actual movement is yet to be launched,’’ he said, thundering to bring about a drastic change in the country through people’s movement. “I urge you right from here, prepare for the change,” he told the gathering.
He also came down heavily on the Nepali Congress leaders of their non-cooperation in democratisation of the Nepalese Army (NA).
Prachanda said, “Erstwhile NC leader, late BP Koirala, had also lamented at the last moment of his life saying that he could not democratise the army.”
Prachanda also criticised President Dr Ram Baran Yadav as a ‘shepherd’ who only knew how to rear cattle and lacked intelligence to be the President. Prachanda also warned all the autocratic political parties of the same fate the monarchy had met should they fail to move with consensus.

NEPALGUNJ: Home Minister Bhim Rawal today claimed that the security situation has been toning up in the country following the launching of the special security plan.
Speaking at a press conference organised by the Banke chapter of Press Chautari Nepal here today, the home minister said, “The security situation has returned to normalcy in the country. It is neither serious, nor out of control.”
“It rests with the police administration. If they act seriously, the guilty can be booked,” he said, “As a step forward, necessary arrangements are being made to equip the police for the implementation of the special security strategy.” Minister Rawal also claimed that the people were hopeful about the special security plan and that the government was leaving no stone unturned to make it a reality.
“Special security plan is for the welfare of people,” he said, adding that the strategy was introduced with the unanimous decision of all political parties.
Meanwhile, speaking to media persons, emerging out of the concluding session of the regional security conference here, Rawal said the police administration was seeking commitment of political parties for the control of criminal activities. He said also assured that the vacant posts in the police administration would be filled up soon. Minister Rawal also warned of an stringent action against any police officials caught in irregularities in custom offices.

#Maoist chairman plans to arm people at large
You May Also like: