Deadline nears, but modality not yet finalised 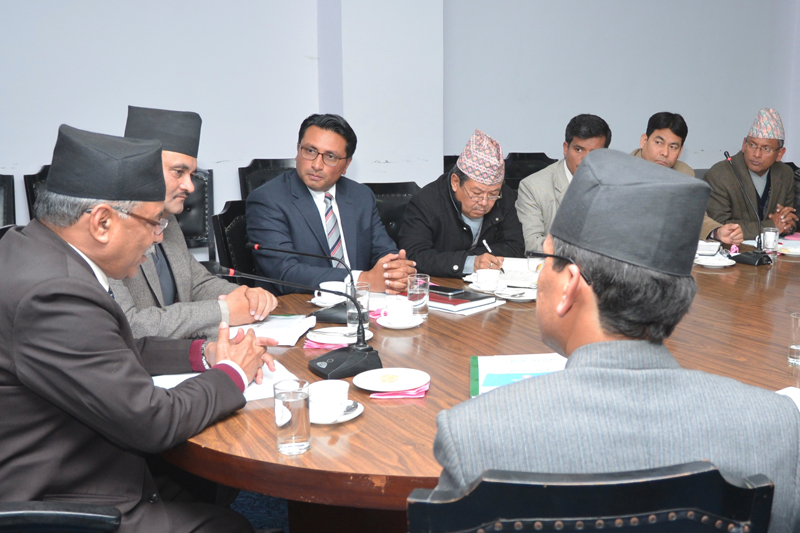 Prime Minister Pushpa Kamal Dahal chairs the National Planning Commission (NPC) meeting in Kathmandu on Sunday, January 8, 2017. Photo: PM's Secretariat
Kathmandu, February 18 Though the deadline extended by the Cabinet has already been missed, a panel led by National Planning Commission Vice Chairman Min Bahadur Shrestha has yet to finalise the resource arrangement and procurement modality of the fast-track project. The project may have to surrender the allocated budget for this fiscal as the deadline given by the Ministry of Finance to show the project’s progress approaches. Projects failing to make headway have to surrender the budget in mid-March. The fiscal budget 2016-17 had allocated Rs 10 billion for the project, but the allocated amount is unlikely to be spent due to lack of preparedness. The government had formed the NPC vice chairman-led panel to carry out a study on resource arrangement and procurement modality for the project on December 22. The panel had to submit a report within a month so that works related to the project could be expedited. It commenced work a week after the Cabinet’s decision, but it has yet to conclude its study. While cancelling the agreement with the Indian firm — Infrastructure Leasing and Finance Services — on December 22, the Cabinet had assigned the NPC vice-chairman-led panel to carry out a study on the applicability of the detailed project report prepared by IL&FS along with resource arrangement and procurement modality. Shrestha refused to comment on resource arrangement and applicability of the DPR. He said a technical team will finalise the study soon. The cost of the 76-km expressway is expected to hover around $1 billion. It is reported that the government will decide on the fast-track project on the basis of the report submitted by the panel. The government had announced in the fiscal budget that it would build the project through its own resources. IL&FS had submitted DPR of the fast track road project, which links the capital with the proposed second international airport in Nijgadh, to the government in July, 2015. IL&FS had quoted Rs 317 billion as minimum revenue guarantee from the road in 25 years of operation under the build, own, operate and transfer modality. It had estimated annual flow of around 7,500 vehicles. If the flow of vehicles was less, the government would be liable to pay the deficit amount to the firm as MRG and if revenue exceeded the MRG, the company had proposed to equally share the additional revenue with the government. The government will have to pay Rs 60 million to IL&FS if the study committee finds the DPR applicable.
#Ministry of Finance #National Planning Commission #Cabinet #Fast Track project #NPC #Min Bahadur Shrestha
You May Also like: