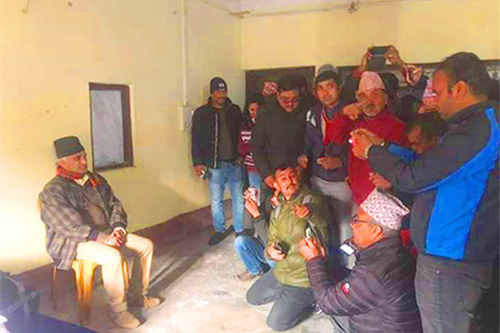 Dr Govinda KC, a senior orthopaedic surgeon responding to mediapersons while staging a fast-unto-death in Ilam district, on Wednesday, January 9, 2019. Photo: THT
Kathmandu, January 11 The health condition of Dr Govinda KC, a senior orthopaedic surgeon, who has been on a fast-unto-death for the last three days, is deteriorating. Doctors involved in the regular health check-up of Dr KC said his health condition had started deteriorating. Dr Ram Krishna Acharya, said the level of glucose in the agitating doctor’s body had fallen by one third and ‘Ketone’ was detected in his urine. In a telephonic conversation, Dr Acharya said Dr KC was experiencing breathing difficulty and his blood pressure had also dropped. “Dr KC’s blood pressure levels are also fluctuating. With each passing day he is losing immunity power, making him vulnerable to infections,” he added. He also shared that Dr KC was suffering from cough and complained of chest pain yesterday. Dr Acharya also added that to avoid infection, no one had been allowed to go near Dr KC. “We have allowed people and journalists to talk to Dr KC but by keeping some distance,” he added. Dr KC had started his sixteenth fast-unto-death on January 9 from Ilam, demanding that the National Medical Education Bill be passed as per the agreement between him and the government on April 23.
#Dr Govinda KC #orthopaedic surgeon #National Medical Education Bill
You May Also like: