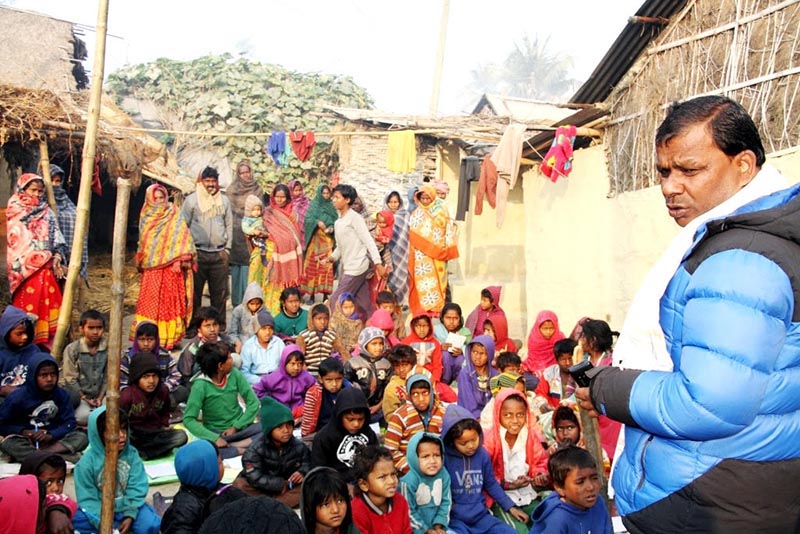 Former irrigation minister Umesh Yadav giving free tuition classes to Musahar children, in Rajbiraj Municipality, Saptari, on Friday, January 18, 2019. Photo: THT
Rajbiraj, January 18 Former irrigation minister Umesh Yadav has launched free tuition classes at Gadhiya tole of Rajbiraj Municiplaity-9 for students from the Musahar community in Saptari. Yadav launched the classes targeting more than 100 Musahar kids, who left school after  admission, at Gadhiya tole. Admission campaign conducted by the government in the beginning of the session had helped enrol 80 per cent children in schools in Saptari. But, many Musahar kids abstained from going to school due to poverty and lack of awareness. “I have started the classes targeting the kids, who have dropped out of school,” Yadav stated. Yadav is running one-and-a-half hour classes at two places in the tole for Musahar kids every day. Yadav has hired a tutor at one place and he takes classes himself at the other place. As many as 45 kids attend classes at one place and 65 Musahar children attend classes at the other place. Local Harilal Sada said free tuition classes had given an opportunity to study to the impoverished children. Janata Basic School Gadhiya head teacher Shyam Sundar Paswan said that effort was commendable to attract Musahar kids to school. Yadav, who is also a leader of Nepal Communist Party (NCP), said he was planning to launch tuition classes at other places as well. Yadav was elected to the second Constituent Assembly from Saptari Constituency-3.
#Saptari #Musahar community #Umesh Yadav #Musahar children #free tuition
You May Also like: