Rajbiraj, January 12 People of the Dom (Marik) community look dejected as they have been suffering due to extreme cold at Chhinamasta Rural Municipality in Saptari. 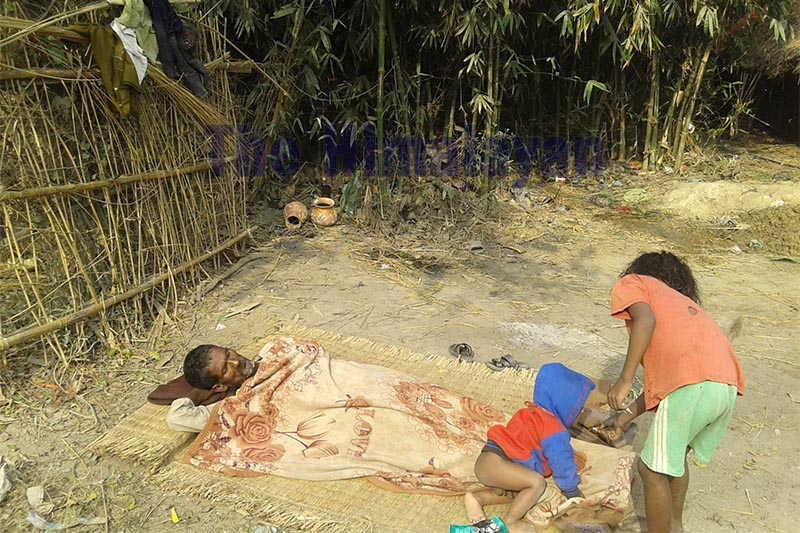 Haleshwor Marik, 70, of the Dom community resting in the yard of his house after falling ill due to the cold wave, in Saptari, on Monday, December 30, 2019. Photo: THT
People from the community lack good settlement and nutritious food due to extreme poverty. They do not have enough protection against the cold. Sixty-five-year-old Sifait Marik said no one was there to help the marginalised and poor families even though they were suffering due to inclement weather. He said, “Some donor agencies had donated some blankets earlier, but no one has reached the community with warm clothes and food items, among other relief materials this year around.” He added children and elderly citizens had started falling ill due to the extreme cold. “The elders and the kids have been affected the most.” He said the leaders of the political parties had visited the village with different assurances during the election, but they had forgotten the villages after they won the election. Sunita Marik, another local, said no authority had helped her with relief. She said she had heard that the local government was there to help the poor. “But the local government seems to be apathetic to the plight of the poor,” she added. Sunita said the government did not even manage firewood in the cold season. Chairman Surya Narayan Mandal at the rural municipality said the rural municipality could not pay attention to the poor people as a group had staged a sit-in protest in the rural municipality office for the past two weeks. “Some relief materials will be distributed to the victims after the situation becomes normal,” Mandal said. Meanwhile, Dom Utthan Samaj, Saptari Chairman Yuktilal Marik said special attention had to be given to the Dom community at Chhinamasta Rural Municipality, among other local levels. “It is vital to take initiatives to save the Dom community in the cold season,” he added.
#Saptari #Dom community #Chhinamasta Rural Municipality #Marik community
You May Also like: