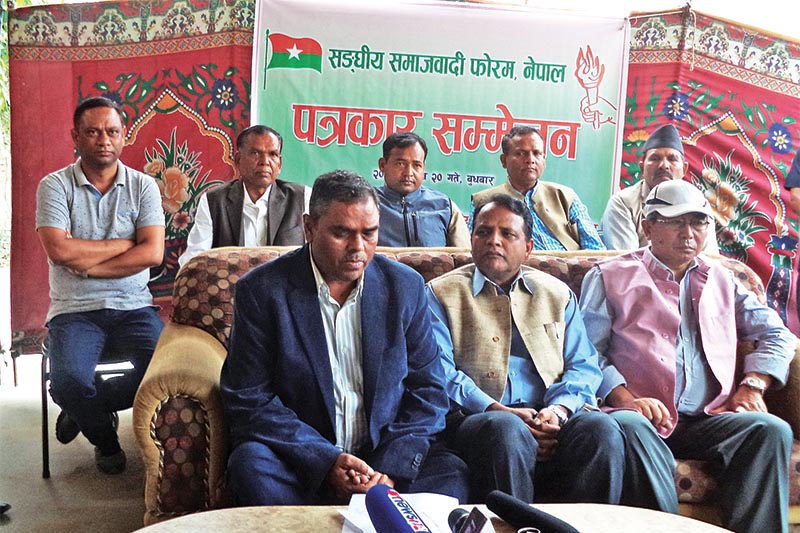 Chairman of Federal Socialist Forum-Nepal Upendra Yadav speaking to mediapersons at a press conference in Kathmandu, on Wednesday, May 3, 2017. Photo: RSS
Kathmandu, May 3 The Upendra Yadav-led Federal Socialist Forum-Nepal today issued a press release saying it would not take part in the second phase of local elections if the constitution was not amended before the polls. Issuing a press release here today, party Chair Upendra Yadav said that his party was taking part in the first phase of local polls as the government had registered the proposal on constitution amendment as per the understanding reached with the agitating forces. FSF-N said that it would be meaningless to hold local polls without amending the constitution. The party also said that it was confident that the United Democratic Madhesi Front would continue to be relevant in the future. The party’s clarification comes on the heels of dissatisfaction expressed by the newly formed Rastriya Janata Party Nepal at FSF-N’s decision to contest the first phase of local polls slated for May 14. The RJP-N which says it would take part in local polls only after the constitution is amended to address their demands has boycotted the first phase of elections. FSF-N said  that it  was in favour of not letting the government hold local polls without amending the constitution and to hold local polls in a single phase, but some constituents of the United Democratic Madhesi Front rejected this proposal, albeit indirectly, and created a compulsion to  accept the government’s proposal. The FSF-N deplored the statements expressed against the relevance of UDMF saying some constituents of the front were talking of extending support to the government without any authentic decision for the same by the front. “At a time when regressive forces opposed to inclusive democracy, republicanism, federalism and secularism are becoming stronger and at a time when there is need to defeat such forces, creating an artificial rift within the UDMF would ultimately aid the regressive forces,” the FSFN said in its release.  The release was issued by party Chair Upendra Yadav. The party said that it was organised in province 3, 4 and 6 and hence it filed its candidates’ nominations for the first phase of polls scheduled for May 14. The FSF-N demanded that constitution should be amended before the second phase of local polls are held. The party said that the government registered a proposal in the Parliament as per the agreement with the agitating forces to amend the constitution. It said the struggle of the Federal Alliance and the UDMF would continue.
#Federal Socialist Forum-Nepal #constitution amendment #FSF-N #Upendra Yadav-led Federal Socialist Forum-Nepal #second phase polls
You May Also like: