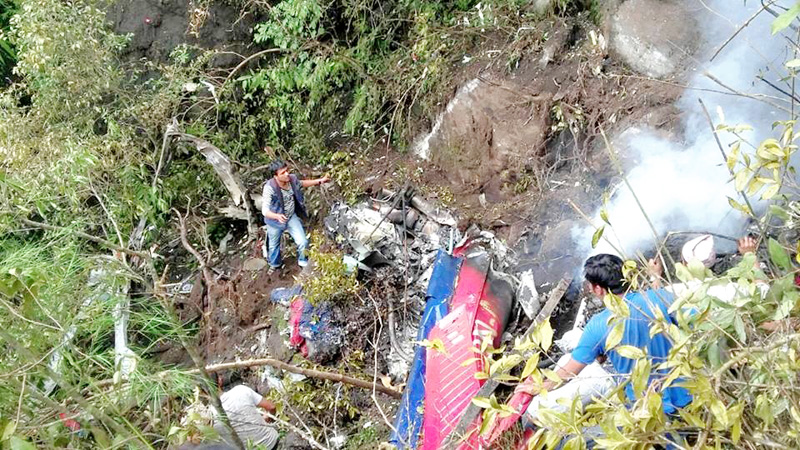 The wreckage of a Fishtail Air Helicopter that crashed at Madanpur in Nuwakot district, on Monday, August 8, 2016. Photo: RSS
KATHMANDU:  The recent crash of a Fishtail Air helicopter in Nuwakot, where all seven persons on board were killed, has, once again, exposed a gaping hole in the conduct of flight operations in Nepal. It has been revealed that the Nepali civil aviation authority – Civil Aviation Authority of Nepal – and the airline operator – Fishtail Air, in this case – have failed to abide by the rules set by the International Civil Aviation Organisation. Why is this case an issue? Crashes of small aircraft do not usually raise eyebrows over the world, unless they are operated by an airline operator which has an air operator certificate issued by the state civil aviation authority. In line with the International Civil Aviation Organisation stipulations, the act of issuing an air operator certificate to an aircraft operator is to ensure a high degree of safety to the travelling public after a thorough assessment of its competence to provide a safe and regular service. “A true and objective compliance with such a wide scope should leave no scope for frequent mishaps," according to aviation officials, "This assessment includes demonstrating an adequate organisation, method of control and supervision of flight operations, training programme, as well as ground handling, maintenance management and maintenance arrangements." A relevant ICAO standard for conducting flights under visual flight rules states, “A flight to be conducted in accordance with visual flight rules (VFR) shall not be commenced unless current meteorological reports or a combination of current reports and forecasts indicate that the meteorological conditions along the route or that part of the route to be flown or in the intended area of operations under VFR will, at the appropriate time, be such as to render compliance with these rules possible.” Additionally, the same ICAO annex also requires enabling the operator’s flight dispatchers to furnish the pilot-in-command while in flight, by appropriate means, with information which may be necessary for the safe conduct of the flight. Besides, it requires the dispatcher in case of emergency to convey safety-related information to the pilot-in-command that may be necessary for the safe conduct of the flight, including information related to any amendments to the flight plan that become necessary in the course of flight. The onus on all Against this backdrop, senior captain YK Bhattarai said it would be plain injustice to a pilot to expect him to ensure compliance with these provisions all by himself, especially when the state of aviation meteorology in Nepal is in tatters to provide reliable forecasts envisaged in the ICAO standard. “Clearly, the onus also falls on the airline operator that has been authorised to conduct flight operations by the Civil Aviation Authority of Nepal,” he added. Besides, the operator is subject to continuing oversight by CAAN air safety inspectors. The inspectors are knowledgeable of the strengths and weaknesses of the operator under their watch, but are never held accountable for their timely inactions. Not the first time Recent helicopter crashes, including the fatal one in 2015 when a chopper hit the power line in Sindhupalchok, show that operations continue to be conducted in violation of the norms for VFR flights, that too in in adverse weather conditions, Bhattarai shared. The investigation of such disasters in Nepal has been reduced to mere junkets allowing former CAAN directors generals and concerned ministry officials to visit foreign investigation agencies with flight recorders and engine components for purported analysis, the Senior Captain added. READ ALSO: The former CAAN DGs, despite their appointment as the chairs of the commissions, remain accountable to none. Will that irony repeat? Interestingly, in the aftermath of the fatal crash of Skyline Airlines aircraft in December 1999 near Simara of Bara, the investigation commission formed under a former Department of Civil Aviation DG, Hari Bhakta Shrestha, never submitted the report to the then government. “Ironically, he has been entrusted the responsibility for investigating the Fishtail Air crash too,” a senior MoCTA official revealed.
#ICAO #CAAN #aviation safety #Civil Aviation Authority of Nepal #Nuwakot #Fishtail Air #Fishtail chopper crash
You May Also like: