KATHMANDU: A total of 1,037 people have lost their lives while 534 have gone missing in the last five years in floods and landslides.

Likewise, the number of injured is exactly the same with that of missing ones, Said the Ministry of Home Affairs.

Similarly, 341 people have gone missing in the floods and 193 in landslides.

The Ministry stated that 97 people went missing in Surkhet, the highest among the affected districts. 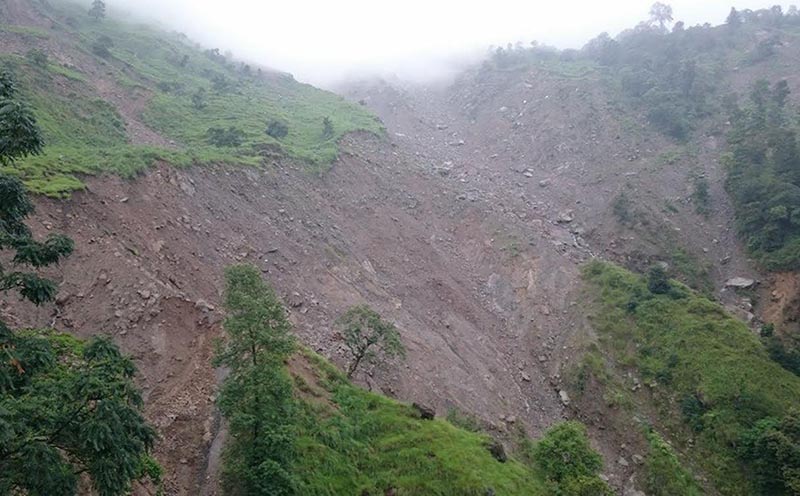 A view of the landslide at Bhoje village in Kolosothar Rural Municipality, Lamjung, on Monday, August 7, 2017. Photo: THT

The three security agencies—Nepal Army, Nepal Police and Armed Police Force— also have dedicated units to act for rescue and relief in times of a disaster.

Meanwhile, the ministry has developed a draft of the bill relating to disaster management, and would soon be tabled before the parliament through the cabinet, said Subedi.

The weak landscape of the hilly regions of Nepal has further deteriorated following the 2015 earthquake and haphazard construction of roads without proper engineering and topography study have also led to rise in the incidents of landslides.

Exploitation of the Chure region, cloud burst and failure of the state to come up with an effective soil-use policy is increasing the damage to life and property in disasters every year.

Furthermore, the unilateral construction of dams on the bordering region by the Indian side is making matters worse for the people living in the Tarai belt of the country.

This monsoon alone 157 people lost their lives due to floods since heavy rainfall hit the major parts of the country since mid-August.

Twenty-nine people were still unaccounted for, according to the Home Ministry.

A total of 43,406 houses were completely damaged, 158,194 suffered partial damage while 100,481 people were displaced by floods and landslides this year.