Kathmandu, June 11 Prime Minister KP Sharma Oli has said freedom of speech plays an instrumental role in the development of a country and prosperity of its society. Addressing the Oxford Union in Oxford, the UK, yesterday, Oli said, “As a person who faced 14 years of imprisonment, including four years of solitary confinement, during struggles for democratic rights, I understand the value of education and freedom of speech for people and society to prosper.”

Oli had landed in London yesterday from Geneva, Switzerland, on the second leg of his three-country Europe visit. He is on an official visit to the UK, at the invitation of British Prime Minister Theresa May. In his keynote speech at the Union, Oli said peace, democracy and development were interlinked and only a democratic system could pave the way for lasting peace and development. Stating that roots of conflict and violence were inherent in human minds, PM Oli said the foundation of peace must be built in human minds. He said democratic deficit characterised the world order. “Systemic inequality still persists on the economic front. Globalisation has not been of equal benefit to all and its very foundation is being challenged by its proponents,” he said. “Comprehensive democracy demands a world order that is democratic, inclusive, just, fair and seeks a balance between enjoyment of rights and fulfilment of obligations, in good faith. Principle of sovereign equality is the foundation of globalisation.” Stating that today’s world had witnessed a popular disappointment with the democratic system, PM Oli said democracy at times, become a formality and a rhetoric, not substantive and people-centred. He said a prescriptive approach not mindful of the local context, did no justice to democracy. “We must admit that there is no single formula of democracy and no fixed model of development. Political system of a particular country may inherit its historical background and socio-cultural features, thus making it unique. We should accept and respect the local reality,” he said. In Nepal’s context, the democratic values and pluralism are inherent in culture and they are born out of own conscience and conviction. PM Oli said promulgation of the constitution marked the conclusion of the peace process and institutionalised the democratic gains made by the people, and the historic elections held in 2017 produced a strong and stable government. “This has ended the cycle of political uncertainty and frequent change of governments. Nepal has ushered in an era of peace, stability and prosperity. Democracy has been consolidated and it has reached the grassroots level,” he said. 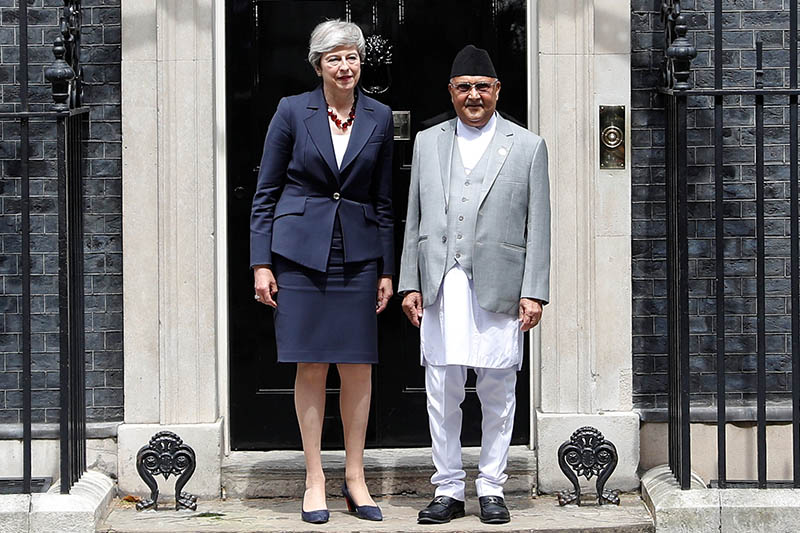 Britain's Prime Minister Theresa May poses with Nepal's Prime Minister KP Sharma Oli outside Downing Street in London, Britain, on June 11, 2019. Photo: Reuters
With political issues settled, according to PM Oli, the government’s fight is now directed against poverty, underdevelopment, inequality, illiteracy and backwardness. “Our vision is guided by the long-term aspiration of ‘Prosperous Nepal, Happy Nepali’. Social justice remains at the core of our polity,” he said. Notwithstanding the prosperity the world has achieved, it is not yet entirely free from poverty, inequality, conflict, climate change, and terrorism, according to PM Oli. Tendencies of populism and protectionism had become more pronounced. Growing tussle between and among the world’s largest economies has raised doubt over the future of multilateral trade system, he said. On climate change, PM Oli said it was unfortunate that countries like Nepal, which contribute substantially to the maintenance of global ecological order are bearing the brunt of climate change. “This is simply unacceptable,” he said.
#Freedom of speech #Prime Minister KP Sharma Oli
You May Also like: