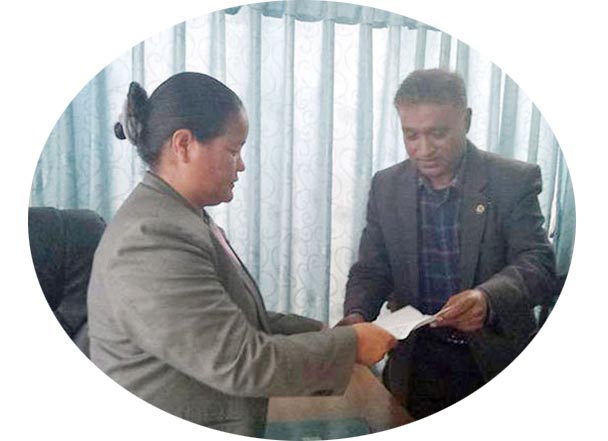 FSF-Nepal Chief Whip Shivaji Yadav hands over a letter on the party's withdrawal of support to the government. Photo Courtesy: Mahesh Chaurasia
KATHMANDU: The Upendra Yadav-led Federal Socialist Forum Nepal has officially withdrawn its support to the coalition government on Wednesday. The party's chief whip Shivaji Yadav handed over a letter, signed by its Parliamentary Party leader Ashok Kumar Rai, to Speaker Onsari Gharti to inform about the support withdrawal. FSF-Nepal, which was formed after the unification of Yadav-led Madhesi Janaadhikar Forum Nepal and Rai-led Federal Socialist Party(Sanghiya Samajwadi Party), has 15 lawmakers in the Parliament.

FSF-Nepal Chief Whip Shivaji Yadav hands over a letter on the party's withdrawal of support to the government. Photo Courtesy: Mahesh Chaurasia
A meeting of the FSF-Nepal's Parliamentary Party held today has decided to withdraw the support that the party lent to Pushpa Kamal Dahal when he was candidate in the prime ministerial election, from today, the letter reads. FSF-Nepal is one of the constituents of United Democratic Madhesi Front and Federal Democratic Alliance also. The UDMF said yesterday that its constituent parties had withdrawn support to the Pushpa Kamal Dahal-led coalition government after an ultimatum that it served to the Prime Minister ended without positive response. Earlier today, the lawmakers of Madhesi parties had walked out of the House after Tarai Madhes Sadbhawana Party Chairman and lawmaker Mahendra Raya Yadav announced that the parties affiliated to the UDMF had withdrawn support to the government. READ ALSO:
#Federal Socialist Forum-Nepal #FSF-Nepal #Forum Nepal
You May Also like: