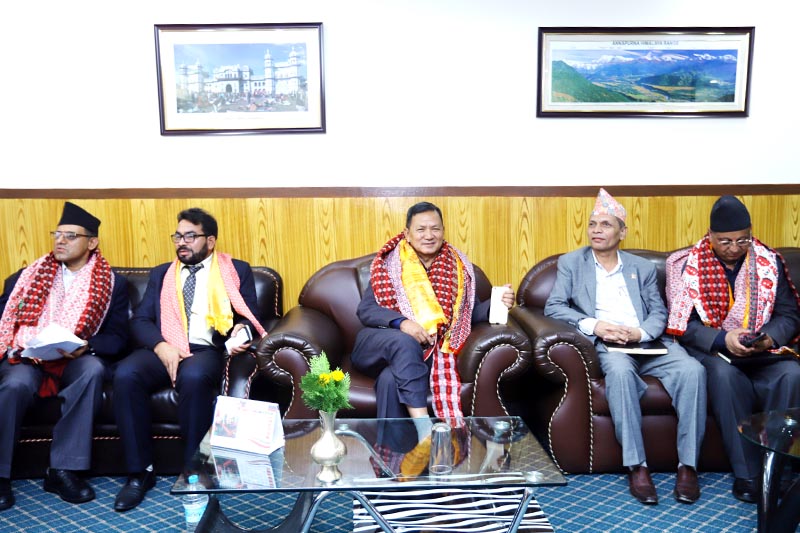 Gandaki Province Chief Minister Prithvi Subba Gurung responding to mediapersons at Pokhara Airport, in Kaski district, on Monday, September 24, 2018. The CM is scheduled to make a week-long visit to Hainan Province in China at the invitation of the Chinese province governor starting September 25. Photo: Baharat Koirala/THT
POKHARA: Gandaki Province Chief Minister Prithvi Subba Gurung will be visiting Hainan Province in China from September 25 to October 1. He is visiting the northern neighbouring country at the invitation of the Hainan Province governor. The province ministers, Provincial Assembly members, chief of security agencies among other government officials saw the chief minister off at Pokhara Airport today. CM Gurung is scheduled to depart for China from Tribhuvan International Airport in Kathmandu tomorrow. CM Gurung apprised the province ministers and lawmakers of his week-long visit to China yesterday. He said that he plans to strengthen the relations between the provinces of two neighbouring countries by inviting the Chinese governor to Pokhara in November. The chief minister said that the topics including organic agricultural farming, hydro and solar energy, and the extension of road network to each local level centres in the province would be discussed in his meeting with the Chinese governor. Talking to mediapersons at Pokhara Airport this morning, the chief minister said that he would call for investment and financial assistance from the northern neighbour for the development of Gandaki Province. Chief Minister Gurung will be accompanied by General Secretary Lakshmi Ram Paudel, Province Policy and Planning Commission Vice-Chair Girdhari Paudel and Chief Advocate Rajendra Ghimire.
#China visit #Prithvi Subba Gurung #Gandaki Province Chief Minister
You May Also like: