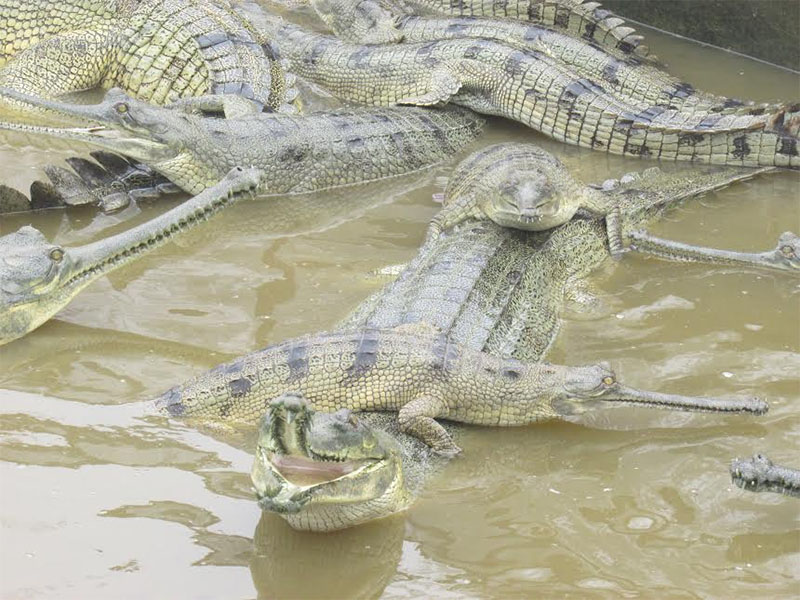 Endangered species of gharial crocodiles lie in the Crocodile Breeding Centre of Chitwan National Park at Kasara, Chitwan. in the pools of the Centre. Photo: Tilak Ram Rimal/File

CHITWAN: The population of gharials is declining rapidly despite the efforts invested by various organisations in Nepal, it has been revealed.

The reptiles released in various rivers are declining in the number, according to Assistant Conservation Officer of the Chitwan National Park, Bed Bahadur Khadka.

The Crocodile Breeding Centre was established at Kasara in Chitwan National park in 1978. The Centre along with its subsidiaries has occasionally been releasing the amphibian reptiles into the six rivers of Nepal since 1981.

He said that the population of the amphibian reptiles were estimated at 150 in each Narayani and Rapti rivers while other rivers are estimated at 50 in average.

A hatchling which leaves its parents in a week after hatching out of egg needs water bodies covering at least 200 kilometres to exercise.

In lack of adequate space, about 75 per cent of the reptiles cross into Indian water, but cannot return to its habitat, officer Khadka asserted.

Apart from the migration, various human activities including fisheries and extracting stones, sand and pebbles from the riverbed have been the main causes of the destruction of the habitats of the amphibian reptiles.

Listed among the species of special concern by the WWF, it has been assumed that 50 per cent of the gharials will be extinct in ten years.