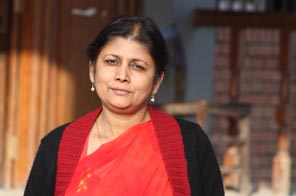 BIRGUNJ: Nepal Sadhbhavana Party- Anandidevi (NSP-A) national chairperson Sarita Giri said on Tuesday the new national consensus government should be formed to end the political deadlock.
Speaking at a press conference organised in Birgunj Giri said that that the new statute could not be drafted within 56 days and therefore the tenure of the Constituent Assembly should be extended for another six months. She said a hectically drafted constitution would be incomplete which could not address the aspirations of the people and plunge the country into another conflict.
She alleged that the major political parties are plotting a game to revive the 1990 constitution by making some amendments to it.
She reiterated that the UML-led coalition government has totally failed to maintain peace and security in Madhes and to forge a consensus to draft the constitution in the given time frame. She reasoned that the Madhesis are in terror due to the government’s special security plan.
In another context, Giri said that Prime Minister Madhav Kumar Nepal’s statement on the Machine Readable Passports (MRPs) is irresponsible.
Earlier, the NSP-A had withdrawn its support to the coalition government on Monday.

#Giri slams PM defence of MRPs
You May Also like: