‘Government on path to authoritarianism’ 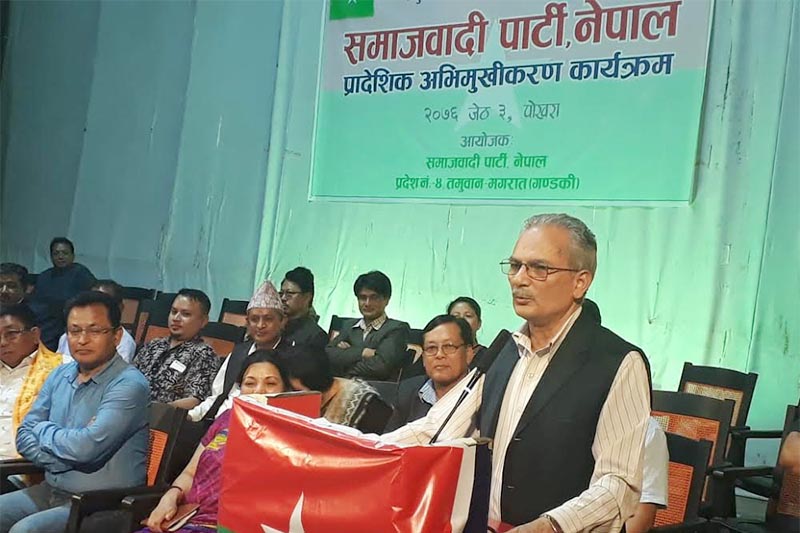 Samajwadi Party-Nepal Chair Baburam Bhattarai speaking at a province-level orientation programme, in Pokhara, on Friday, May 17, 2019. Photo: THT
Pokhara, May 17 Samajwadi Party-Nepal Chair Baburam Bhattarai today accused the KP Sharma Oli-led government of heading towards authoritarianism. He flayed the government for failing to deliver good governance, prosperity and development. Addressing a province-level orientation programme of his party in Pokhara, Bhattarai commented that it was futile to expect prosperity and development from the incumbent government. “The government has become neo-feudalist and its ministers are involved in corruption,” Bhattarai said, adding, “People frustrated with the shallow promises of the non-delivering government are now seeking for an alternative party.” The era of Nepali Congress has come to an end. The NC had a leading role in the establishment of democracy in the country. However, the party now has lost its relevance, Bhattarai said. He argued that his party would take leadership for the country’s development and prosperity. SP-N’s other Chair Upendra Yadav warned of quitting the government and launching a street protest, if the government did not implement the agreement reached with his party to amend the constitution. He stressed the need to preserve the rights achieved so far and hit the street for more rights for marginalised, ethnic and Madhesi people.
#Baburam Bhattarai #KP Sharma Oli-led government #authoritarianism #Samajwadi Party Nepal
You May Also like: