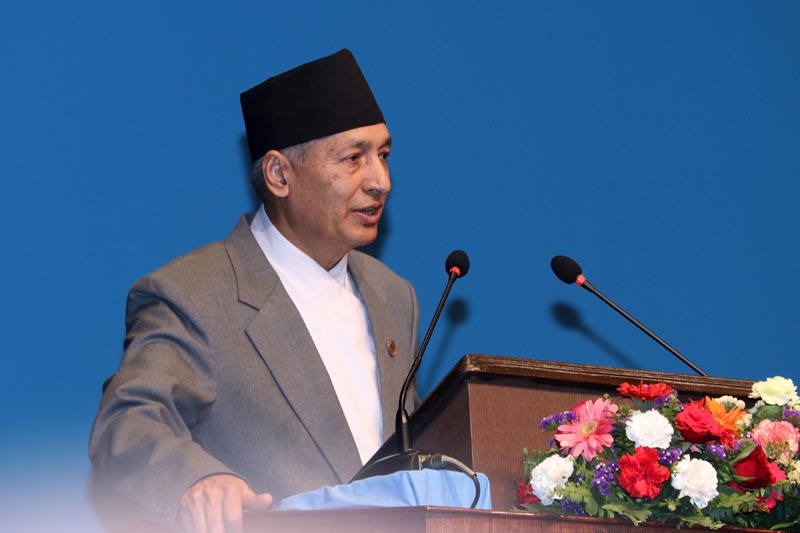 Finance Minister Yuvaraj Khatiwada presenting the budget for fiscal year 2019/20, at the Federal Parliament, in Kathmandu, on Wednesday, May 29, 2019. Photo: RSS

Finance Minister Yubaraj Khatiwada today presented Rs 1.532 trillion federal budget of fiscal 2019-20 in the joint session of the House of Representatives and National Assembly, with due priority to infrastructure development.

The second federal budget has laid high emphasis on development of roadways, railways, waterways, hydropower and airports, and has projected that the country’s economy will grow at 8.5 per cent and inflation will remain below six per cent in the upcoming fiscal.

The government has also expressed its commitment to complete major projects, including Melamchi Water Supply Project, Bhairahawa International Airport and Motihari-Amlekhgunj Oil Pipeline Project within 2019-20. It has prioritised completion of pending projects during the year.

Of the total budget for 2019-20, the government aims to utilise Rs 957.1 billion as recurrent expenditure; it has earmarked Rs 408.59 billion and Rs 167.86 billion for capital expenditure and financing provision, respectively.

The budget has set federal government’s revenue collection target of Rs 981.12 billion for the next fiscal. The government plans to seek foreign grants and loans worth Rs 298.8 billion and Rs 58 billion, respectively. Internal borrowing worth Rs 195 billion is expected to balance the expenditure and source for the budget.

Under the revenue-sharing scheme, the provinces and local bodies are expected to receive Rs 130.89 billion in the next fiscal.

The budget has given priority to domestic industries, especially export-oriented industries, generation of employment opportunities, promotion of agriculture and tourism sector and enhancement of public service delivery.

The government has also raised elderly allowance by Rs 1,000 to Rs 3,000 per month and monthly allowance for single women, people with disabilities, Dalits and other marginalised communities has also been increased by Rs 1,000.

The budget has given continuity to health insurance worth Rs 100,000 for senior citizens.

It has also announced restructuring of the Prime Minister Agriculture Modernisation Project and effectively implementing it in the upcoming fiscal year, thereby creating more employment opportunities.

The government has announced tax of one rupee per litre on petrol and diesel for road maintenance purpose, in addition to five rupees per litre being levied for the construction of the Budigandaki hydropower project.

The government has announced it will develop nine cities, including Kathmandu, Birgunj and Biratnagar, as megacities and connect every rural municipality with at least one strategic road.

In a bid to make effective the collection of Value Added Tax, the government has also announced a 10 per cent rebate on the VAT levied on total transaction made by a customer while purchasing goods and services through digital payments.

Meanwhile, economist Bishwo Poudel, said the budget had followed the previous trend of being distributive in nature and had failed to adopt austerity measures necessary to ensure economic growth.

“The recurrent budget and the size of revenue collection is almost the same, which clearly shows that majority of the collected revenue will be spent on recurrent expenditure. This is not good,” he said.

However, unchanged income tax slabs and no additional tax burden in the budget are certain to encourage the business community, he added.