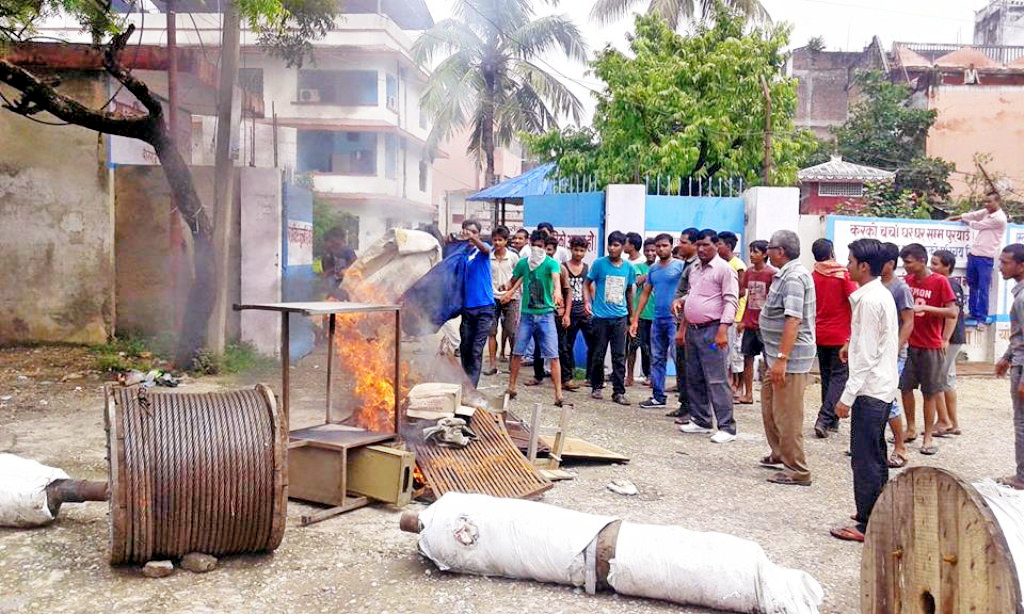 Protesters buring furniture at Adharshanagar-based Tax Office in Birgunj. Photo: Ram Sarraf
BIRGUNJ: At least three persons were hit by bullets after security personnel opened fired near the Narayani Sub-Regional Hospital in Birgunj on Tuesday. Security personnel resorted to firing after protesters defied curfew and gathered outside the hospital Two of the injured have been identified as  Narendra Chaudhary and Binod Mahato, a health professional, while the identity of third person, who is said to be patient visiting the hospital, is yet to be ascertained. It has been learned that Chaudhary is a policeman who was deputed at the hospital in plain clothes. The hospital staff said it has been very difficult for them to provide regular services to the visitors following the incident. Meanwhile, protesters barged into the Adharshanagar-based Tax Office and vandalised it. They set furniture ablaze. The district headquarters of Parsa, Birgunj, has been reeling under tension since early morning after the supporters of various Madhesi parties took to the streets defying curfew. READ ALSO: Birgunj goes tense since morning, two protesters injured
#Birgunj #protesters #defy the curfew #gun shoot #Madesi parties #mob #Tax Office
You May Also like: