Kathmandu, January 28 Although Prime Minister KP Sharma Oli and leader of the opposition Sher Bahadur Deuba spoke in favour of the Millennium Challenge Corporation Compact Programme at the first meeting of the House of Representatives today, some voices opposed the US-backed scheme in a sign that the MCC would be hotly debated this Bill Session. This can also be gauged by the fact that many influential leaders of the ruling Nepal Communist Party (NCP) are publicly speaking against the $500 million grant scheme, stating it is tied to the US-led Indo-Pacific Strategy, which they say is a military alliance. Right after his swearing-in yesterday, HoR Speaker Agni Sapkota had said there was no need to endorse the MCC in haste amid the ongoing debate. 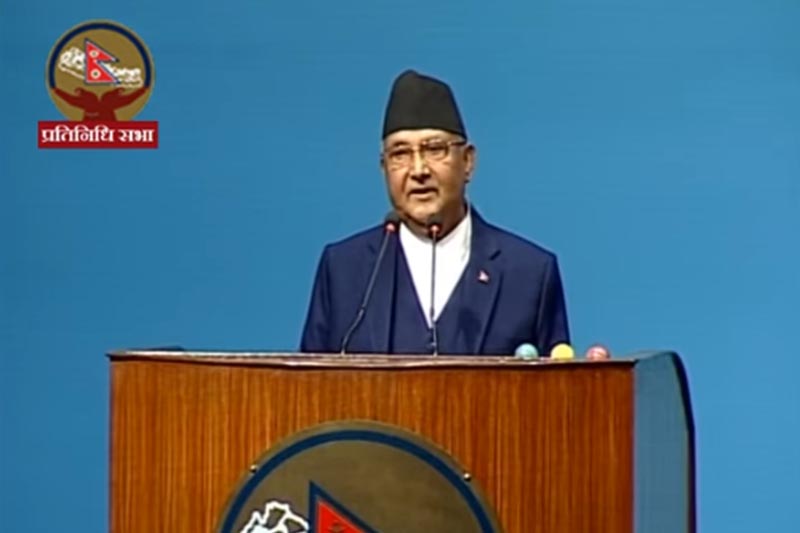 Prime Minister KP Sharma Oli adresses the first meeting of the House of Representatives, on Tuesday, January 28, 2020. Photo: HoR, Nepal/Youtube live
Addressing today’s HoR meeting, Prime Minister Oli said the Parliament had many bills and proposals to endorse this session and MCC was among them. “I will tell the Parliament about it in detail in future, but the MCC is a scheme that has gone through different phases under six or seven prime ministers. It is awaiting parliamentary endorsement,” the prime minister said.

Prime Minister KP Sharma Oli adresses the first meeting of the House of Representatives, on Tuesday, January 28, 2020. Photo: HoR, Nepal/Youtube live
Main opposition Nepali Congress President Deuba said since the US embassy in Kathmandu had made it clear that the MCC did not have any military component, there was no reason to stop it. “Nepal can benefit immensely from the MCC, which will enable the country to export power to India,” he said, adding, “I request this House to endorse it soon.” The MCC assistance is to be invested in the development of cross-border power transmission lines and upgradation of the East-West and Karnali highways. However, Rastriya Janamorcha Party lawmaker Durga Paudel said that the MCC should not be implemented because it was part of the IPS, which she termed a NATO-like military alliance. Nepal Workers and Peasants Party lawmaker Prem Suwal also said the MCC would be against Nepal’s policy of non-alignment. “We should not allow the US to station its military in Nepal,” he said. US officials have said the MCC is part of the economic pillar of the IPS, with the other two pillars being governance and military-defence. They have said the IPS is a name given to the US policy that advocates free and open Indo-Pacific Region and encompasses every US engagement in the region. They have also made it clear it does not require any country to be a partner or sign up to anything. In a statement on January 17, the US embassy categorically said the MCC did not have any military component as the US law prohibited it. The government too has made it clear that the MCC agreement does not mention any military component. In fact, the agreement was signed before US President Donald Trump coined the term IPS.
#Prime Minister #KP Sharma Oli #Sher Bahadur Deuba #House of Representatives #Prime Minister KP Sharma Oli #Nepali Congress president #MCC programme #Millennium Challenge Corporation Compact programme #Bill Session #US-backed scheme
You May Also like: