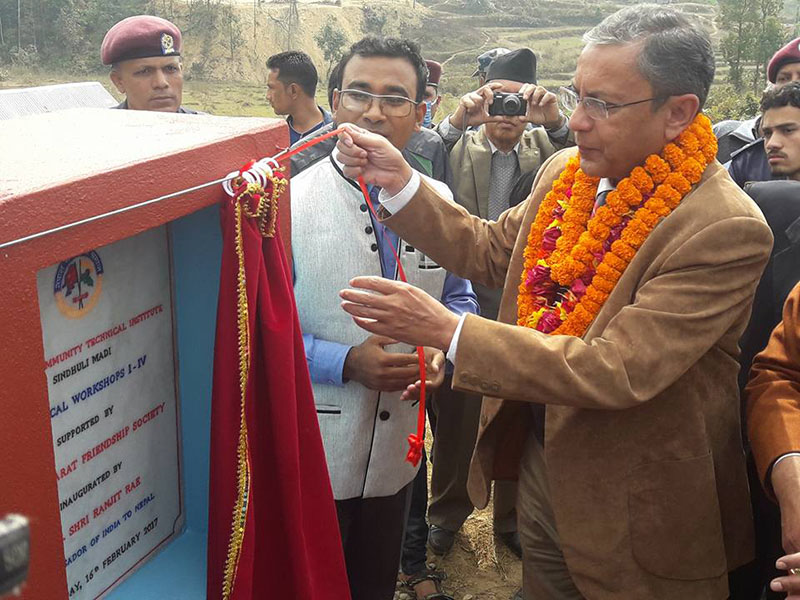 Indian Ambassador to Nepal Ranjit Rae inaugurating the newly constructed Sindhuli Community Technical Institute building, in Sindhulimadi, on Thursday, February 16, 2017. Photo: THT
Kathmandu, February 16 India has committed NRs 44 million for construction of a new building for Sindhuli Community Technical Institute in Sindhuli. A tripartite Memorandum of Understanding was signed by Gyanveer Singh, second secretary in the Embassy of India, Kathmandu; Shiva Humagain, local development officer, Sindhuli; and Ambar Deep Devkota, principal, Sindhuli Community Technical Institute for the construction of a building for SCTI in Sindhuli, according to a press release issued by the Embassy of India. Under the project a three-storeyed building with 19 rooms, computer and internet lab, reading room with other facilities will be constructed with a financial assistance of NRs 44 million by the Government of India under its Small Development Programme Scheme as part of India–Nepal Economic Cooperation Programme. The MoU was signed in Sindhuli in the presence of Ambassador of India to Nepal Ranjit Rae. Sindhuli Community Technical Institute was established in 2014 and is providing diploma courses in engineering and plans to expand programmes to health and agriculture. The Institute is affiliated to CTEVT and is being operated by the community with support from the Government of Nepal.  The new infrastructure will provide much needed classroom space and contribute to the development of technical education in the district, according to the release. In his speech, Ambassador Rae hoped that the project would be completed within the scheduled 15 months as envisaged in the MoU. The Government of India under its multi-sectoral and multi-dimensional Economic Cooperation Programme with the Government of Nepal, has been providing financial assistance for various large and small development projects in different parts of Nepal, mainly in the sectors of education, health and infrastructure development, in response to local needs and in consultation with the Government of Nepal. Rae hails Nepal-India ties SINDHULIMADI: Indian ambassador to Nepal Ranjit Rae on Thursday hailed the Nepal-India  relations as deep and unique. Inaugurating the new building of Sindhuli Community Technical Institute here, the Indian envoy said, “India has helped Nepal for long and the same has nurtured special relations between two countries in the development and political fronts.” Rae also pledged continuity to the support from his government in the future. “The ties between the two countries are exceptional as thy have successfully withstood the test of time all these years. Our government is interested in taking this relationship to the people-to-people  level,” he said, adding that his government is willing to extend its  support to all sectors in Nepal ranging from agriculture to tourism and  hydropower.
#Kathmandu #Sindhuli #Indian Ambassador to Nepal Ranjit Rae #Embassy of India #Nepal-India #Sindhuli Community Technical Institute
You May Also like: