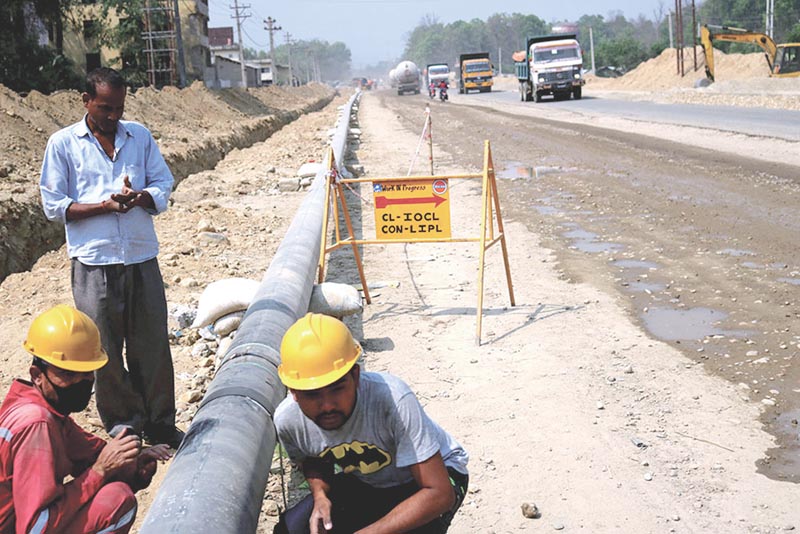 Workers laying petroleum pipeline in Amlekhgunj, Mahottari, on Wednesday, April 18, 2018. Photo: THT
Kathmandu, September 28 The Indian government has agreed to extend the Motihari-Amlekhgunj oil pipeline to Lothar of Chitwan. A joint working group meeting of the cross-border pipeline led by Minister for Supplies Matrika Yadav and Indian Minister for Petroleum and Natural Gas Dharmendra Debendra Pradhan, which was held here today, decided to make bilateral efforts to extend the Motihari-Amlekhgunj fuel pipeline to Chitwan. Pradhan is on a two-day visit to Nepal to observe the progress of the 69-km oil pipeline stretching from Motihari of India to Amlekhgunj of Nepal. A recent study carried out by Indian Oil Corporation had shown the viability of extending the petroleum pipeline to Chitwan. Based on the very report, the joint working group meeting decided to capitalise on the aforementioned plan. “The Indian authorities at the meeting were positive towards our proposal to extend the petroleum pipeline to Chitwan. The two governments will soon initiate necessary groundwork,” said Nabaraj Dhakal, spokesperson for the Ministry of Industry, Commerce and Supplies. The two sides also agreed to initiate necessary groundwork to construct the cross-border liquefied petroleum gas pipeline from Motihari to Chitwan. Extension of the petroleum pipeline to Chitwan as well as construction of Motihari-Chitwan gas pipeline will be a milestone to ensure effective supply of fuel to Kathmandu valley. The two sides also agreed to construct a cross-border natural gas pipeline from Gorakhpur of India to Bhairahawa of Nepal. This is the first time that the two countries have reached an agreement on constructing natural gas pipeline. India also agreed to supply necessary fuel refuellers to Nepal at government-to-government level. The fuel refilling system in the country’s airports, especially at Tribhuvan International Airport, is under pressure due to lack of ample number of fuel refuellers. Meanwhile, Indian Oil Minister Pradhan expressed his concerns about the ongoing construction work of the cross-border petroleum project. “The project is crucial to ease fuel supply in Nepal and should be completed as soon as possible,” Dhakal quoted Pradhan as saying. Though the pipeline laying process of the oil project has been completed across a majority of the project route, encroachments along a few areas are yet to be cleared due to the delay in approval of the environmental impact assessment of the project by the government. Pradhan added that necessary steps would be taken to allow Nepali LPG bullets to ferry fuel from IOC’s depots to Nepal at the earliest.
#Indian government #Chitwan #Matrika Yadav #fuel pipeline #Motihari-Amlekhgunj oil pipeline #Minister of Supplies #Indian Minister for Petroleum and Natural Gas #Dharmendra Debendra Pradhan
You May Also like: