Joint political document of NCP to be revised: Dahal 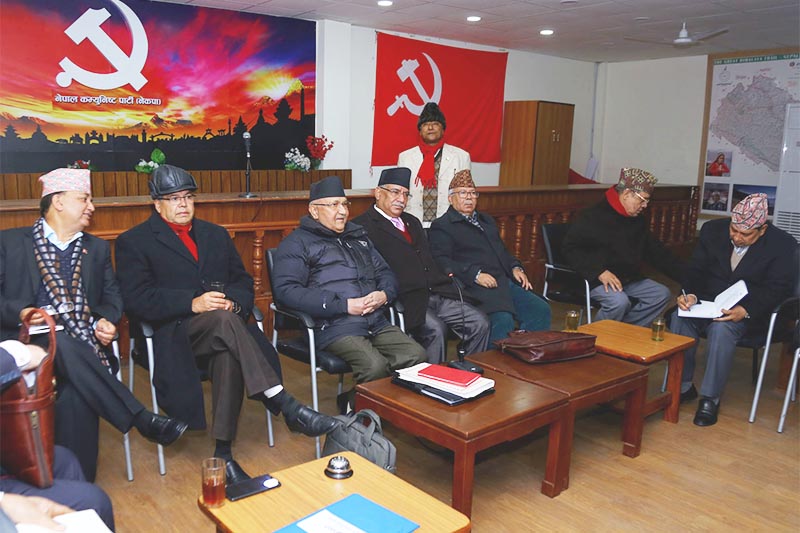 Nepal Communist Party (NCP) Chair KP Sharma Oli, Co-chair Pushpa Kamal Dahal among other leaders participate in the party's standing committee meeting held at Party Headquarters in Dhumrabarahi, Kathmandu, on Wednesday, December 26, 2018. Photo: RSS
Kathmandu, December 26 Co-chairperson of Nepal Communist Party (NCP) Pushpa Kamal Dahal told the party’s Standing Committee members that their suggestions and feedback would be incorporated in the joint political document presented by him and another Co-chairperson and Prime Minister KP Sharma Oli. Dahal said this while responding to the issues raised by SC members. Oli will respond to the SC members tomorrow. According to SC member Ganesh Shah, Dahal said that the joint political document would be revised incorporating the SC leaders’ feedback. SC member Mani Thapa said the government was on the right track but needed to improve its functioning. He said the party had failed to defend the government’s performance as party unity was yet to be completed. According to Thapa, Dahal also told party leaders that the unification of lower committees would be completed within one month by forming a task force. “The party should be leading the government but it seems that the government is leading our party and this is happening because we have not completed party unification yet,” Thapa quoted Dahal as telling the meeting. He said that although it was a communist government with almost two-thirds majority in the parliament, it was not yet a communists’ state power. “We need to achieve the goals of socialism by ending all the remnants of feudalism,” Thapa quoted Dahal as saying.
#Prime Minister #KP Sharma Oli #Pushpa Kamal Dahal #Nepal Communist Party (NCP) #Ncp (NCP) standing committee
You May Also like: