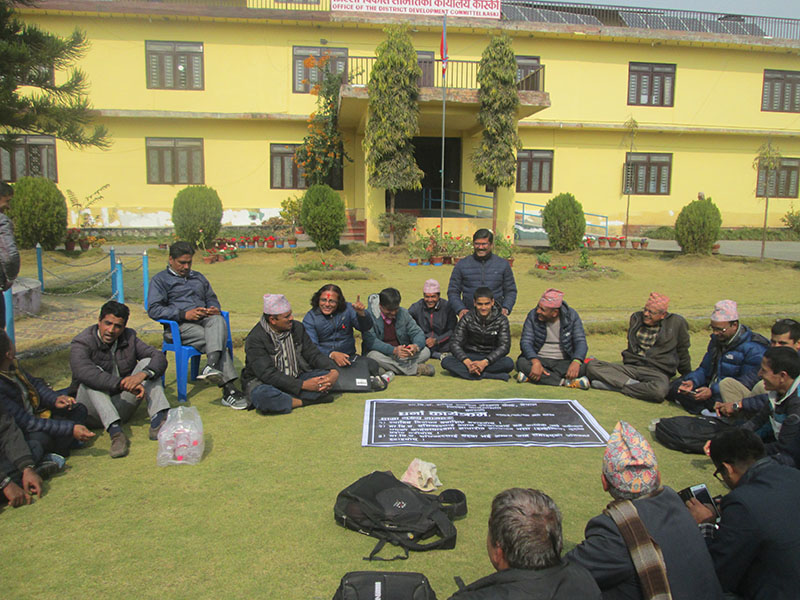 Secretaries of 32 Kaski VDCs staging a sit-in demanding incentives on the premises of District Development Committee office, in Pokhara, on Thursday, February 2, 2017. Photo: THT
Pokhara, February 2 All Kaski Village Development Committee secretaries today had staged a sit-in demanding that the government implement an agreement reached with them regarding incentives for VDC secretaries on the basis of their performance on the premises of District Development Committee in the district. The agitation, initiated by the VDC Secretaries Rights’ Conservation Centre, was launched in as many as 3,015 VDCs across the country. The VDC secretaries said that the government has neglected implementation of the past agreement. The VDC secretaries have warned that the agitation will continue until their demands are addressed. The government had endorsed the agreement to introduce performance-based incentives, but the agreement was only implemented for a short time because they had not taken permission from the Ministry of Finance this fiscal. The government had decided to provide an incentive of at least 40 to 50 per cent of the basic salary based on performance. “They stopped providing incentives after the first three months,” said Chairperson of the VDC Secretaries’ Rights Conservation Centre Kaski Toya Nath Timilsina. “Staff members of other government offices such as Inland Revenue Office, Fund and Accounts Control Office and the courts are receiving performance-based incentives ranging from 50 to 100 per cent of their salaries. However, our office has been cut off,” said another secretary Min Prasad Baral. Sildajure VDC Secretary Ram Krishna Bastola said they had to resort to protest because the memorandum they had handed over to the Minister for Federal Affairs and Local Development Hit Raj Pandey one-and-a-half months ago was not heeded.
#district development committee #VDC secretaries #DDC #Kaski Village Development Committee secretaries
You May Also like: