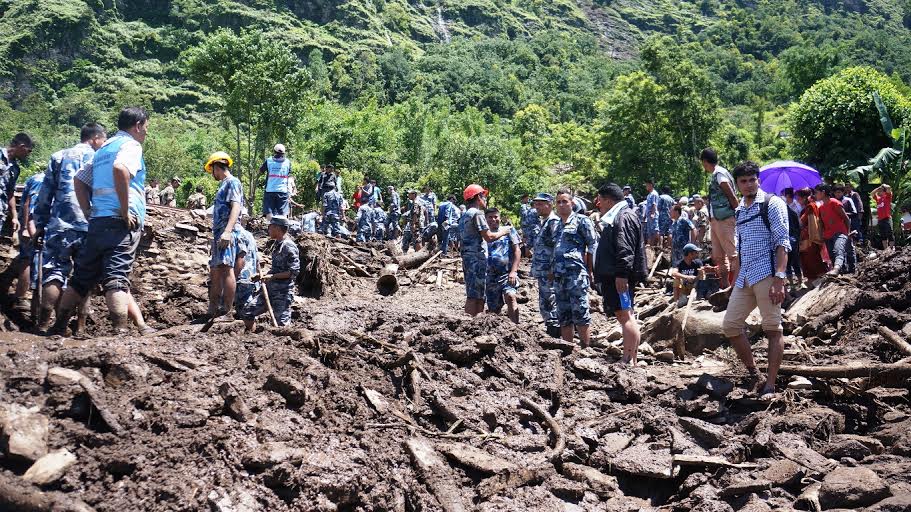 The death toll in Kaski landslides has jumped  to 21.

At least five people were killed and 14 others sustained injuries in the massive landslides in Bhadaure VDC today.

The injured have been receiving treatment at various hospitals in Pokhara.

It has been learnt that some injured persons are in critical condition.

Police said that the Pokhara-Baglung highway has also been damaged by the landslide, causing difficulty for the rescue team to reach the affected areas.

According to Hari Pal of the DPO, Kaski, the death toll could rise as many people are still missing.

Lumle, 25 miles from the Pokhara City, is the heaviest rainfall area of Nepal.

The exact details of loss and damage to human lives and property properties are yet to be established.

Security personnel, however, are carrying out rescue operation in the incident sites.

Similarly, a man died after his house was buried by a landslide in Aaprema, Raya Danda-9 of Baglung on Thursday morning.

The deceased has been identified as Karnadhar Thapa (83).

Police informed that the landslide also swept away a house in the same VDC today.

Likewise, two persons lost their lives in a landslide in Myagdi district.

The deceased has been identified as Melina Pun of Muna-4 Myagdi. The identity of other person is yet to be ascertained.

Police said that they are carrying out rescue operation.

At least 16 bodies were recovered in Lumle VDC alone on Thursday morning and  28 people are said to be missing.  Many houses were either buried  or swept away by massive landslides there, according to DSP Gyan Prasad Acharyaof District Police Office.

According to locals, a water reservoir burst causing flash floods and landslides in Lumle following a downpour last night.

At least four people were killed in Bhadaure VDC also.

Security forces have been deployed to the affected areas including Lumle, Chapakot and Bhadaure for rescue operation.

A Nepal Army chopper has been used for the purpose.

Meanwhile, landslides in neighbouring Myagdi district killed at least seven people. Some people have gone missing in the affecte areas.