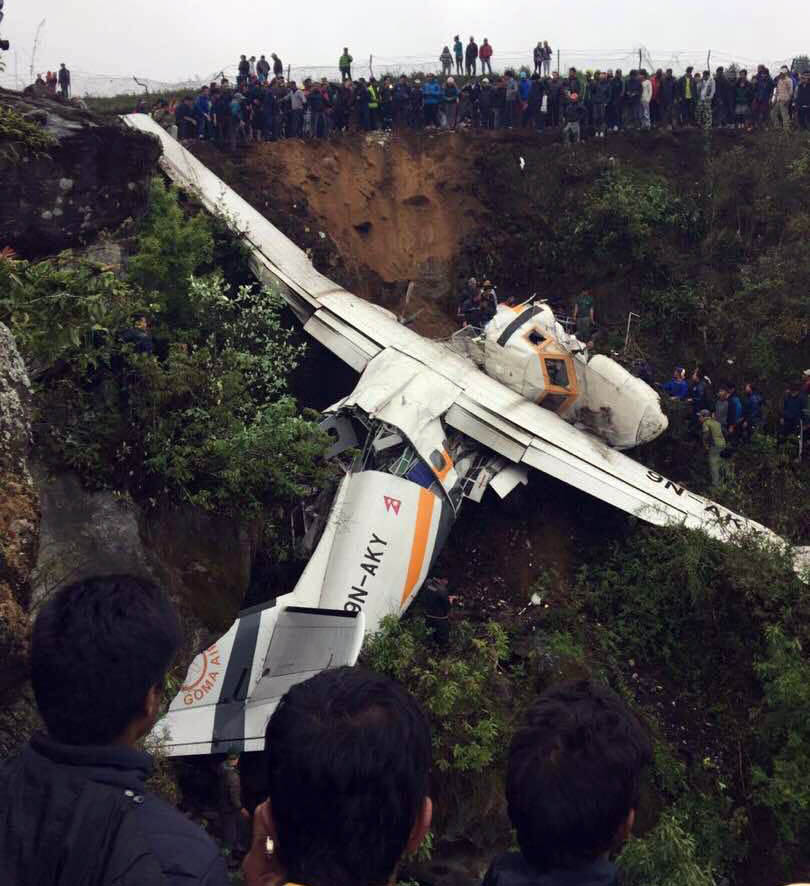 Wreckage of crashed Goma Air flight in Lukla, as captured on Saturday, May 27, 2017. Photo Courtesy: Pasang Sherpa
KATHMANDU: A senior pilot and co-pilot were killed when an aircraft belonging to Summit (Goma) Air crashed while landing in foggy weather at tiny Lukla Airport in the Mt Everest region on Saturday afternoon. Senior captain of the 9N-AKY (LET 10) cargo flight Paras Kumar Rai, 48, died on the spot. Critically injured co-pilot Srijan Manandhar was rushed to a hospital in Lukla but he succumbed to injuries nearly eight hours after the accident.

Wreckage of crashed Goma Air flight in Lukla, as captured on Saturday, May 27, 2017. Photo Courtesy: Pasang Sherpa
The bodies have been brought to the Maharajgunj-based Tribhuvan University Teaching Hospital in Kathmandu for postmortem. Flight attendant Pragya Maharjan, who was injured in the incident, is said to be out of danger.

Wreckage of crashed Goma Air flight in Lukla, as captured on Saturday, May 27, 2017. Photo Courtesy: Pasang Sherpa
The cargo plane with three crew members crashed while landing at Tenzing-Hillary Airport in Lukla at 2:05pm, Prem Nath Thakur, spokesperson at Tribhuvan International Airport in Kathmandu, confirmed. The cargo plane was piloted by captain Rai, a permanent resident of Bhojpur district, Goma Air’s officials said. Rai is survived by his wife, a daughter (fifth grader) and a son (first grader). According to Thakur, round-the-clock efforts to airlift the co-pilot and flight attendant failed due to bad weather. Two helicopters were put on standby at Lukla to airlift the injured to Kathmandu for treatment, an official said. “But, the visibility in Lukla airport remained nil after the accident.” Flight attendant Maharjan suffered minor injuries while rescuers found the captain and co-pilot trapped in the cockpit of the ill-fated plane. Co-pilot Manadhar had been rushed to Nicole Niquille Hospital where doctors wanted him to be airlifted to Kathmandu for further treatment at the earliest due to extensive internal bleeding. According to eyewitnesses, the plane hit a tree three metres below the runway threshold and crashed. “The weather suddenly played foul when the captain was making final approach in one of the world’s most ‘dangerous airstrip’ for landing,” airport officials added. Rescue operation was carried out by the locals, Nepali Army and police personnel, Pasang Sherpa who witnessed the scene said. “But, freak weather throughout the day restricted helicopters from airlifting the injured to Kathmandu.” Ministry of Culture, Tourism and Civil Aviation is going to form a high-level panel today to investigate the accident, according to Joint Secretary Suresh Acharya, who also heads the aircraft accident investigation division. The Civil Aviation Authority of Nepal will also send a technical team to Lukla today.
#Lukla air crash #Summit Goma Air crash #Srijan Manandhar #Paras Kumar Rai #Pragya Maharjan
You May Also like: