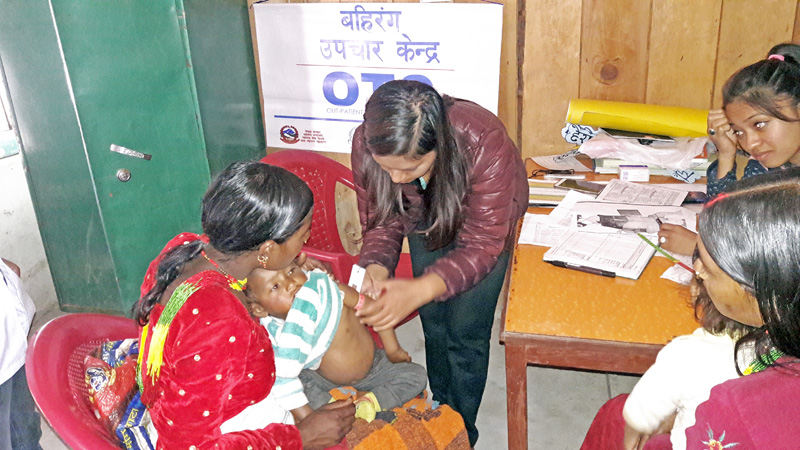 File - A health worker examining a child suffering from malnutrition in Martadi, Bajura, on Wednesday, November 30, 2016. The health check up was organised by the Integrated Rural Health Development Training Centre Nepal in coordination with the Ministry of Health. Photo: THT
Bajura, March 11 According to a recent report released by District Public Health Office, Bajura, malnourished girls outnumber the boys by a huge margin in the district. Of the 640 minors, who were labelled under fatal malnutrition, 401 were girls. According to the DPHO, 742 girls out of 1353 children were suffering from malnutrition. The office pointed out that many new mothers actively participate in breast feeding if it were baby boys. “The mothers do not pay attention to the health of baby girls as much as they do with boys,” said an official at DPHO. With economic, religious and cultural preference for boys ingrained in the people, sex selective abortions, although illegal, have only gone up. The procedure to determine the sex of a fetus is illegal in the country but is widely practiced. Sita BK, a women’s health volunteer, says that malnutrition has escalated in minor girls because of the discrimination. “A large number of new mothers do not eat nutritious food when they find out they are carrying a girl,” she said. Kali BK of Sappata VDC said that her family members took care of her when she gave birth to a boy few years ago. “When baby girl as bor, everyone ignored her and me. My daughter does not get nutritious food and she’s now underweight and malnourished,” said a worried Kali . “It is not just the baby girls who are ignored. The mothers face the wrath of the family members if she gives birth to girls,” said Rukhmani Shah, chairperson, Woman Rights Forum, Bajura. Chief Dr Mohan Nath at DPHO said that health workers reached different villages and conducted survey of children below the age of 5.  “Mild malnutrition was found among 1,490 children and 649 children were found to be suffering from fatal malnutrition,” Nath informed. The health workers from District Public Health Office included health posts’ staffers, volunteers and the representatives from IRHDTC-Integrated Rural Health Development Training Center Nepal. Treatment to these malnourished children has begun. If they are not given treatment at their local health posts, they are brought to the DHO, said Dr Udaya Prakash of IRHDTC, adding that two children, who were fatally malnourished, died during the treatment.
#Bajura #malnutrition #Bajura DPHO #Mohan Nath #Girls malnutrition
You May Also like: