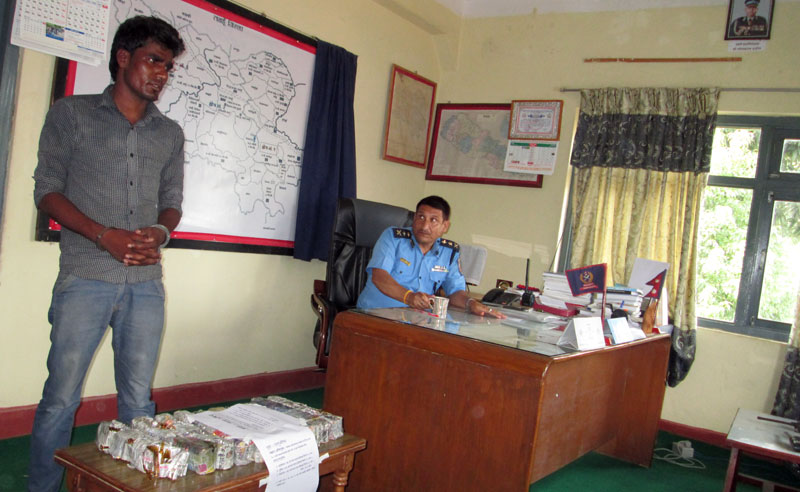 Police parade Radhe Shyam Lodh, who was nabbed with various controlled drugs, from Damauli of Tanahun, on Thursday, September 3, 2015. Photo: Madan Wagle
DAMAULI:  The Tanahun District Police Office (DPO) has arrested a person with illegal drugs worth Rs 1 million from the district headquarters, Damauli, on Thursday morning. The suspect has been identified as Radhe Shyam Lodh (23), a permanent resident of Patiyar VDC-8, Kapilvastu district. Acting on a tip-off, a police team deployed from the DPO nabbed Lodh during a security check in front of the DPO and confiscated 500 ampoules of daizepam, noufen and phenargan each, said SP Mohan Kumar Acharya in a press meet organised in Damauli today. Lodh was driving a red Chevrolet Aveo car (Ba 9 Cha 8968) when the police stopped him and checked his vehicle. “He was taken under police control after the police found the illegal drugs hidden near the driver’s seat,” said SP Acharya. “The alleged was heading to Pokhara from Balaiya border point of Rupandehi when the police team seized the illegal drugs.This is probably the first time we have confiscated such a huge amount of illegal drugs in Tanahun,” added Acharya. “A man had come along with me upto Muglin of Chitwan but he took off the vehicle there giving me Rs 10,000 and asking to handover a bag to the other person who will be waiting me in Damauli," the suspect said, "Honestly, I had no idea what was in the bag.” The DPO said that the police have filed a case against him under the Narcotic Drugs (Control) Act, 1976 and further investigation is underway. Meanwhile, the District Court remanded him to custody for further probing.
#held with drugs #Man arrested #Controlled drugs #Illegal drugs #Drugs seized #Narcotic Drugs Control Act 1976 #drugs confiscated
You May Also like: