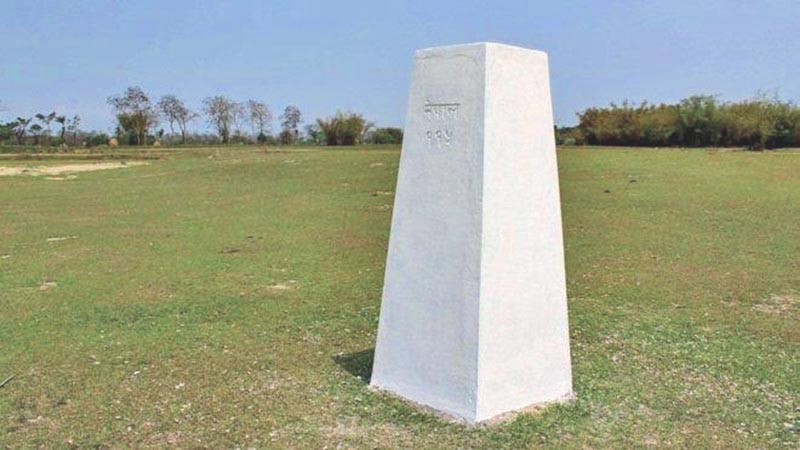 One of the newly constructed pillars on the Nepal-India border in Kailali, on Tuesday, January 1, 2019. Of the 133 missing pillars, 27 have been erected. Photo: THT
Dhangadi, January 1 Of the total 133 border pillars that have gone missing on the Nepal-India border in Kailali district, 27 have been replaced so far. “There are a total of 229 main pillars and 53 minor pillars on the Nepal-India border in the district. Against the total 133 missing pillars, so far 27 have been constructed by our team,” said Nepal-India Border Survey Team No 4 Chief Land Survey Officer Janakraj Bhatta. “While 11 major and 62 minor pillars require reconstruction, 141 pillars require minor repairs, still 68 others fall in river areas as per the findings of the pre-survey of border pillars conducted by a joint survey team of both Nepal and India,” Bhatta added. Following the erection of pillars at the points where the pillars had gone missing, some 16 bigha land in Kalakunda area of Kailali, being used by the Indian side has now come under the jurisdiction of the Nepali side. Similarly, a chunk of land being used by the Nepali side in Kusumghat area has fallen into the Indian side after the missing pillars were replaced.
#Kailali #Nepal-India border #border pillars
You May Also like: