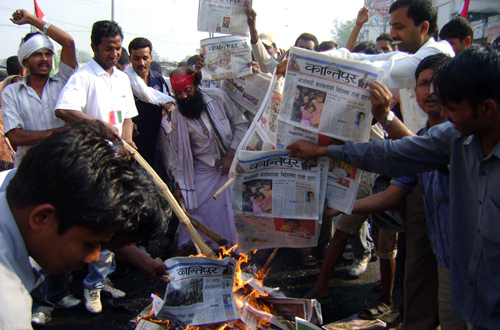 Cadres of MJF Parsa burning national daily newspapers on the second day of their Terai bandh at Ghantaghar Chowk in Birgunj, on Friday, April 9, 2010, for failure to cover their protest. Source: THT

BIRGUNJ: Cadres of the Madhesi Janaadhikar Forum (MJF) burnt copies of national daily newspapers citing the reason that they did not publish the news and photos of their Andolan.
A group of activists led by MJF Bara vice chairman Pradeep Yadav seized copies of the newspapers Nagarik and Republica which were delivered from Kathmandu and set fire to them. They also set ablaze copies of The Kathmandu Post and Kantipur national dailies after purchasing them from newspaper vendors. However, the newspapers The Himalayan Times and Annapurna Post were spared due to their extensive coverage of the agitation.
Yadav acknowledged that they burnt the newspapers which did not cover the news of their protest. He also warned that they would not allow the distribution of any kind of newspaper which ran negative coverage of their agitation in Birgunj.
The second day of the bandh saw an increase in violence compared to the first day. Irate agitators damaged the headlights of two dozens of motorbikes after seizing them at Ghantaghar Chowk for defying the bandh.

#MJF vents fury on dailies
You May Also like: