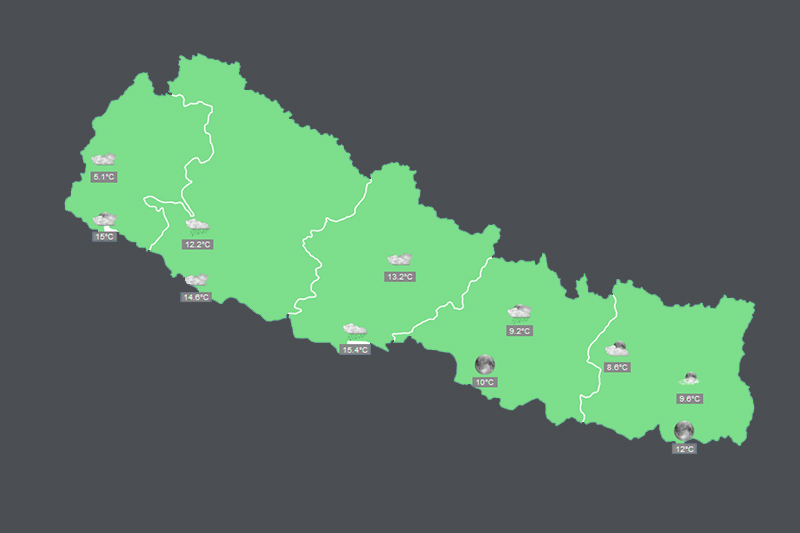 This image shows the weather maps of Nepal on Thursday, Fenruary 7, 2019. Photo: MFD Nepal
Kathmandu, February 6 The Meteorological Forecasting Division has predicted overcast skies with light to heavy rain in parts of the country, including Kathmandu valley, for three days. The change in weather pattern has been attributed to the western disturbance, an extra-tropical storm originating in the Mediterranean region that brings sudden winter rain. According to a three-day weather forecast released by the MFD, the western disturbance is expected to usher in a spell of light to moderate rain across the country, mainly in parts of the western region tonight. It has also forecast light to moderate snowfall in high hilly and mountainous areas of the western and central regions. “Some places in the western and central region may receive heavy rain, in addition to moderate to heavy snowfall in the high hills and mountainous regions tomorrow and the day after tomorrow,” the forecast read. The MFD has forecast that the western disturbance will continue to keep the weather in most parts of the country cloudy and rainy on Friday. The weather system will return to its normal cycle from Friday onwards, it predicted. Meanwhile, the Department of Hydrology and Meteorology has sounded flood alert for people living near rivers in hilly areas. “Heavy snowfall in high hilly areas and heavy rain in hilly areas tomorrow may trigger avalanches and landslides,” DoHM posted on its Twitter account.
#Department of Hydrology and Meteorology #Meteorological Forecasting Division #MFD #rain forecast #weather of Nepal
You May Also like: