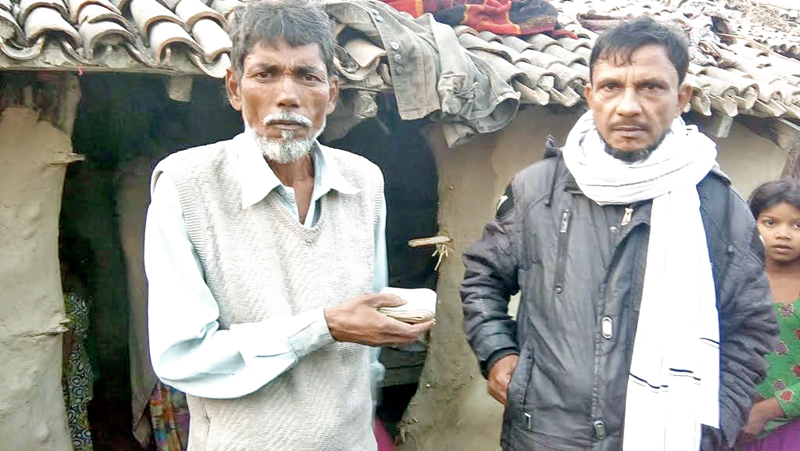 Ilahi Miya (left) returning Rs 50,000 dowry to his daughter-in-laws father after Tilak Dahej Lenden Banda campaign was launched in Katahariya, Rautahat, on Wednesday, December 21, 2016.The campaign was launched against the dowry system. Photo: THT
Rautahat, December 21 Islam does not approvemoney earned without toil. Even so, the scourge of dowry system hasn’t spared the practitioners of the religion either and tainted the community as a whole given the greed factor among a handful of Muslims in the Tarai. It was with the aim of eliminating this social evil that the Muslim leaders of Rautahat launched a campaign against dowry. As a part of the campaign launched about one-and-a-half month ago, bridegrooms’ families from the Muslim community in the district are reimbursing dowry taken from the brides’ families. Earlier, as part of the campaign, Tilak Dahej Lenden Band Abhiyan was declared from Jamiya mosque in Rajpur Pharahadawa VDC, Rauthat, about one-and-a-half month ago, amidst the presence of Muslim religious leaders. A monitoring committee had been formed to ensure the implementation of the campaign. The recent practice of returning dowry has picked up after the committee started spreading awarenessby reaching out to the villages. “The campaign is sending positive message to the Muslims,” said Muslim leader and Joint Muslim Struggle Alliance Coordinator Haji Jikurulla. Just this Monday, Shekh Jakir of Rajpur Pharahadawa had reached Kanakpur VDC, Jangalsahiya along with a marriage party to marry the daughter of Shekh Wakil by accepting 1.5 lakh rupees as dowry. However, he was bound to return the dowry to the bride’s family after representatives of the monitoring committee reached the wedding site in the nick of time. Besides, Imam Maulana Mustupha of Jangalsahiya mosque had to pay Rs 50,000 in fine for facilitating the marriage. He was released in the presence of the local police after being served a warning not to facilitate any marriage that involved dowry. Similarly, just a few days ago, 21-year-old Saddham Mansur of Katahariya and Hasmun Khatun, 19, of Sakhuawa Dhamaura had tied the knot. Though the bride’s family presented a dowry to the bridegroom’s family, the latter returned the amount in the presence of the monitoring committee. Earlier, in the same village, a bridegroom had returned 1.5 lakh rupees dowry. The bride’s father Bhikhari Mansuri had given the amount to the bridegroom’s family as dowry on the day the marriage was finalised amidst a ceremony. The bridegroom’s side returned the amount on the day of marriage. “As our religion doesn’t entertain giving or taking dowry, we are doing the needful to ensure that the practice is uprooted from our community; for this we have formed monitoring sub-committees in villages,” said Jikurulla, adding that over 10 million rupees received in dowry had been returned to the brides’ families in the district ever since the campaign was launched.
#dowry #Rautahat district #Muslim community
You May Also like: