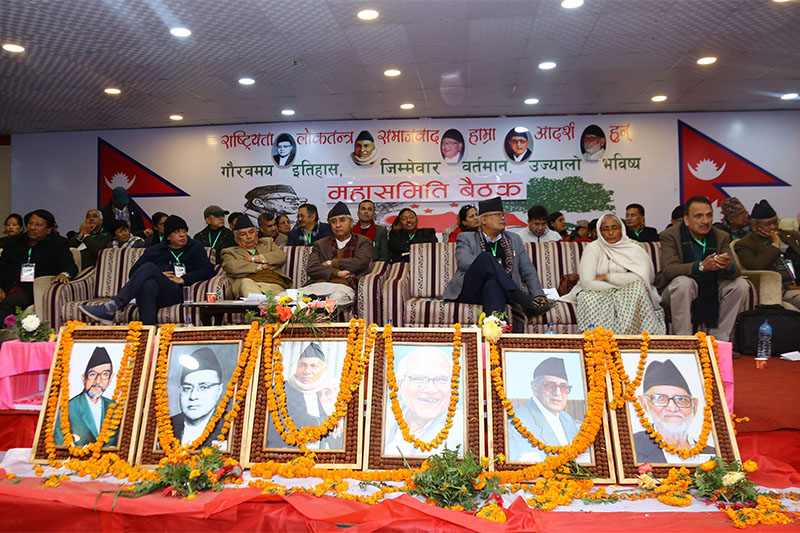 Nepali Congress senior leaders and cadres participate in the closed session of the ongoing Mahasamiti meeting in Kathmandu, on Tuesday, December 18, 2018. Photo: RSS

KATHMANDU: In the ongoing mega meet -- mahasamiti meeting -- of the Nepali Congress, leaders gathered in the capital from across the country censured senior leaders about their involvement in factionalism resulting in party's invisibility in country politics and national development.

Arguing that the groupism reared by some big leaders created a dispute in the party, the mahasamiti members suggested the leadership to correct its actions on time and revive the party's image and strength.

Discussion on the political, organisational, financial policy and internal accounts related documents continued on Tuesday, the fourth day of the ongoing mahasamiti meeting.

However, the statute draft report is yet to garner consensus on the number of office bearers and the selection process. So, it is yet to be presented before the mega-meeting.

A mahasamiti member, Krishna Ji Khadka, observed that the discussion was not held as per cadres' expectations. He drew the leadership's attention to quickly sort out thorny issues.

Another member Man Kumari Gurung said the country was now in need of NC's leadership, so it is high time the party acted in a united manner.

Nima Giri put it that the mahasamiti meeting must be result-oriented for effective policy and strategy. Both the role and future of youth and women need to be guaranteed in the party's organisational report, according to her.

Similarly, Sitaram Mehata who came from Sunsari complained over the delay on presentation of the draft of statute amendment.

Pramila Yonjan from Kavrepalanchowk argued that advocating for a particular religion would not incorporate the views from diverse people.

Mahasamiti meeting is to be extended as the dispute on party statute amendment continues. Daily schedule of big leaders has been affected owing to the persisting dispute.

However, an effort is underway to forge consensus on pressing issues concerning the statute, informed Spokesperson Bishwo Prakash Sharma.

#Nepali Congress #Sher Bahadur Deuba
You May Also like: