He is scheduled to inspect the UN peacekeeping mission for which Nepal Army personnel are deputed in Lebanon,the Nepal Army's Directorate of Public Relations said.

General Chhetri will inspect the contingent of Nepali peacekeepers who are currently serving for the United Nations Interim Force in Lebanon (UNIFIL).

According to the Nepal Army's DPR, General Chhetri is scheduled to meet Lebanese Armed Forces Commander General Jean Kahwaji at the LAF headquarters in Yarze today.

He would inspect the Gorakh Dal battalion's Lebanon-based headquarters, and address the ranks and file today itself.

On Wednesday, General Chhetri would visit and inspect different sites and posts in Lebanon where the Nepal Army personnel carry out their duties wearing blue helmets.

A total of 869 Nepal Army personnel, including 849 contingent and 20 staff members, are currently serving in Lebanon, while the total number of Nepal Army peacekeepers across the world is 4362. 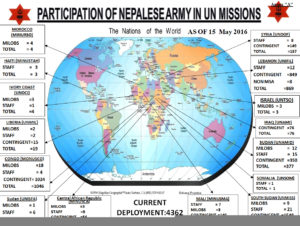