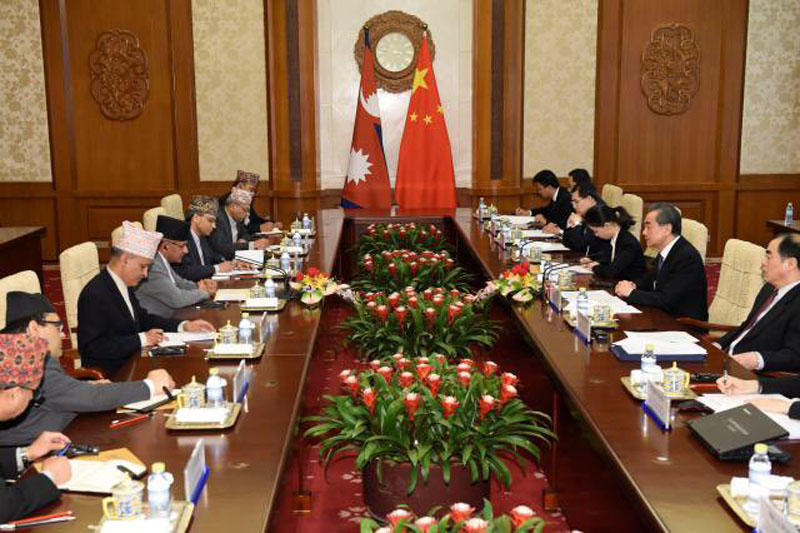 KATHMANDU: Minister of Foreign Affairs Pradeep Kumar Gyawali, who is currently on an official visit to China, called on Vice-President of China, Wang Qishan at Zhongnanhai Wednesday morning.

A press release issued by Nepali Embassy in Beijing mentioned that Foreign Minister Gyawali conveyed the greetings and best wishes of Prime Minister KP Sharma Oli and said that Nepal appreciates President Xi Jinping's vision of 'building a community of shared future for humanity', and supports China's thrust on enhancing cooperation among nations under the Belt and Road Initiative.

Highlighting the fact that Nepal and China have been enjoying excellent relations based on friendship and good neighbourliness since ancient times, Vice-President Qishan stressed on fully tapping the potentials of bilateral relations between the two countries.

The two sides expressed satisfaction over the excellent state of bilateral relations, and agreed to elevate these relations to new heights. In this context, both sides underscored the importance of regular exchange of high-level visits for promoting bilateral relations based on trust and friendship.

Gyawali said that Nepal appreciates China’s neighbourhood diplomacy guided by the principles of sincerity, amity, mutual benefit and inclusiveness. Both sides agreed to expedite the implementation of all agreements and understandings reached in the past, including those concluded during the visit of Prime Minister KP Sharma Oli in March 2016 and former Prime Minister Pushpa Kamal Dahal in March 2017. They shared common views on developing cross-border multi-dimensional transport networks for better connectivity and shared prosperity.

Moreover, the two sides agreed to establish a coordination and implementation mechanism for facilitating the effective implementation of the Chinese government-aided projects. They held discussions on achieving an enhanced level of bilateral co-operation in the development of infrastructure, transportation networks, trade, tourism and people-to-people relations under the Belt and Road Initiative, and agreed to identify projects for cooperation under the Initiative.

Discussion was held on conducting the feasibility study and preparation of DPR of Nepal-China Cross Border Railway line from Keyrong to Kathmandu, and from Kathmandu to Pokhara and Lumbini. Also, they agreed to convene the meetings of bilateral mechanisms at the earliest, and continue consultations for finalising the instruments under negotiations.

Foreign Minister Gyawali emphasised the need to open more cross-border routes in the coming days, and to upgrade the facilities in the Rasuwagadhi/Keyrong and Tatopani/Zhangmu ports. They also discussed early re-opening of Tatopani port.

On Tuesday, Foreign Minister Gyawali attended a reception hosted in his honour by the Embassy of Nepal, Beijing. Representatives of Beijing-based think-tanks and the academia, members of the Nepali community, friends of Nepal as well as several members of the diplomatic community in Beijing attended the function.

On the occasion, Minister Gyawali also unveiled 'The Selected Speeches of Prime Minister KP Oli', translated into Chinese language. The Foreign Minister is scheduled to deliver a speech at a round table organised by China Reform Forum in Beijing Thursday morning.