By THT Online
KATHMANDU: Police of Nepal and Greece recently rescued a Nepali man from clutches of abductors led by a Nepali woman in Athens of Greece. Nepal Police said the 24-year-old Nepali national Krishna Gurung was recently abducted by the gang of seven including two Nepalis, three Bangladeshis, an Indian and a Pakistani. A permanent resident of Oringa, Chainpur Municipality-1 of Sankhuwasabha district, Gurung was rescued by the Crime Against Life and Property Investigation Sub-Division of Greek Police on April 13 after getting information from the Nepal Police Central Investigation Bureau via the Interpol. His hands and legs were tied while there were wounds on head and other body parts at the time he was rescued from Kypseli area of the Greek Capital, according to police. 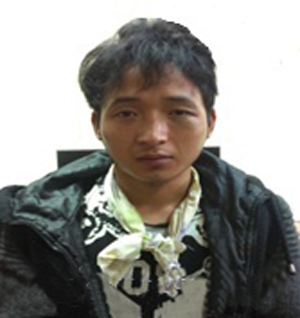 Kidnapped Nepali migrant worker Krishna Gurung rescued in Athens, Greece. Photo: CIB
Nepal Police in the statement today said Gurung had informed his brother Chandra Prasad that he was abducted, on March 30. Then, the CIB here had immediately relayed the information to Greek Police via the Interpol. Besides tipping-off the Greek security agency about the incident, the CIB also collected information about the victim in a close connection with the family members and forwarded it to Athens. Meanwhile, police in Athens already nabbed five suspects of the abduction including two Nepalis, an Indian, a Pakistani and a Bangladeshi. They had called the victim's brother here in Nepal using Nepali and Hindi languages and demanded a ransom of Euro 14,000, according to police. The kidnappers had even threatened to kill the victim upon failure to meet the demand. Gurung was living in Thessaloniki city of Greece for last two years on a job while he had gone to Athens in March last week, police investigations revealed. Nepal Police claimed that a Nepali woman named Aaiti Ghale (31) had masterminded the crime while another Nepali Dal Thapa Tamang (35), Indian Jamal Kazi (27), Bangladeshi Mammun Mullah (28) and Pakistani Monsoor Ahmed (32) had worked as accomplices to carry out the abduction. All of them were arrested from Athens. Police added two more Bangladeshi nationals were involved in the crime, but they are on the run. The Greek police are looking into the incident while they plan to file cases against the suspects for kidnapping, attempted extortion, robbery, causing bodily injury and violation of weapon legislation, Nepal Police said.
#abduction #Hostage taking #extortion #Nepali abducted abroad
You May Also like: