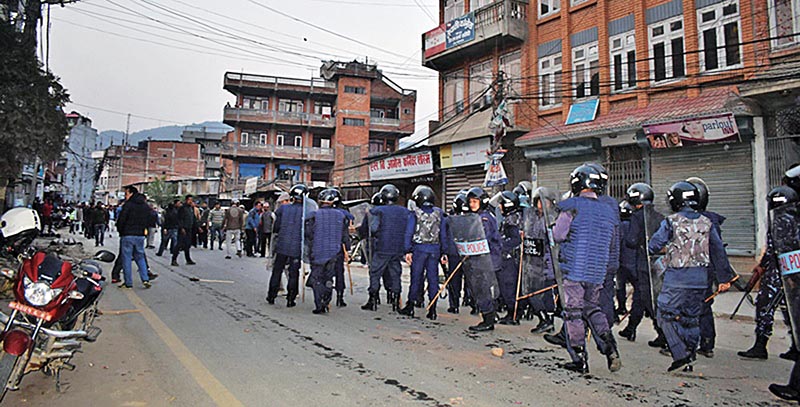 Police personnel deployed to maintain security during a demonstration by Nepali Congress cadres, in Banepa, on Saturday. Photo: RSS
Kavre, March 17 Nepali Congress leaders and cadres staging a torch rally demanding the release of Ganesh Lama was arrested with pistol and bullets from Kathmandu a few days ago, clashed with police in Banepa this evening. The clash took place after police tried to stop demonstrators, who had taken out a rally from Banepa’s Godamchowk. A few demonstrators and a policeman were injured in the clash. Police fired two rounds of tear gas shells to take the situation under control. The injured policeman has been identified as assistant sub-inspector AmodYadav, who received injury to his face after demonstrators hurled a stone at him. Half a dozen NC leaders and cadres, including district leader Ramesh Humagain, were also injured in the incident. According to DSP Mahendra Marasini of Kavre police, police fired tear gas shells after the crowd turned violent. Meanwhile, NC Kavre president Madhu Acharya accused the government of trying to frame Lama in a fake case. NC Kavre has sought unconditional release of Lama, who was defeated in the provincial election from Kavre Constituency-2. Police had arrested him from Gaushala-based Pashupati Vision on Wednesday with a pistol and  six rounds of bullets. Lama is in judicial custody for investigation.
#Nepali Congress #Kavre #clash #Banepa #NC cadres #Ganesh Lama
You May Also like: