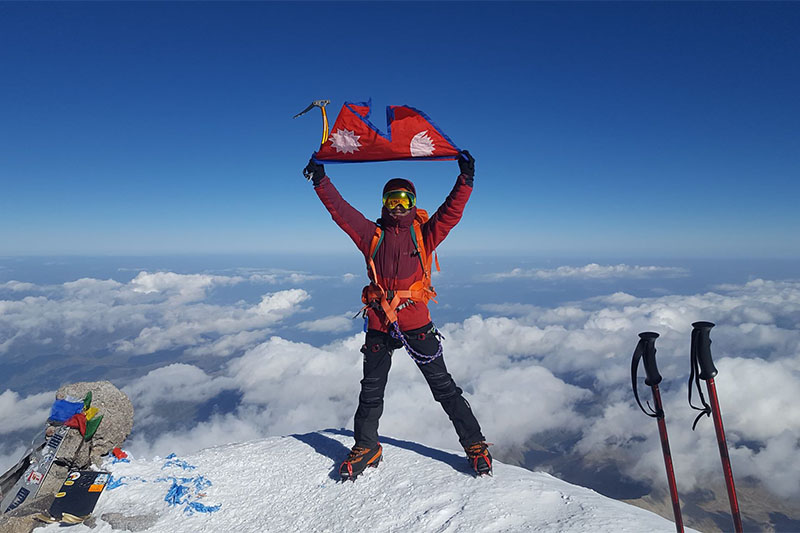 Narbin Magar on top of Mt Elbrus. Courtesy: Magar/Facebook
KATHMANDU: A 23-year old Nepali climber successfully scaled Mt Elbrus, the highest mountain in Europe, this morning. Narbin Magar from Solukhumbu stood atop the 5,642-metre peak at around 8:19 am after he found a fair window to make the final summit push, according to expedition organiser. “I have climbed Europe’s highest peak on my quest to become the youngest Asian to climb the seven summits,” Magar said after returning to the base camp. According to him, he has been climbing mountains to raise awareness about the impact of climate change on the high Himalayas. With a slogan “save the Himalayas for safe future”, Magar had climbed Mt Everest in the last spring season. He also scaled Africa’s highest peak – Mt Kilimanjaro (6,895 m) on August 4 this year. “I have climbed three highest peaks – Mt Everest, Mt Elbrus and Mt Kilimanjaro – in three continents within 106 days,” Magar claimed. Magar has already held a record of the youngest person from his community to successfully climb the world’s highest peak. “I will try to complete all seven summits within the next two years.”
#Mt Everest #Solukhumbu district #Mt Elbrus #Mt Kilimanjaro #Narbin Magar
You May Also like: