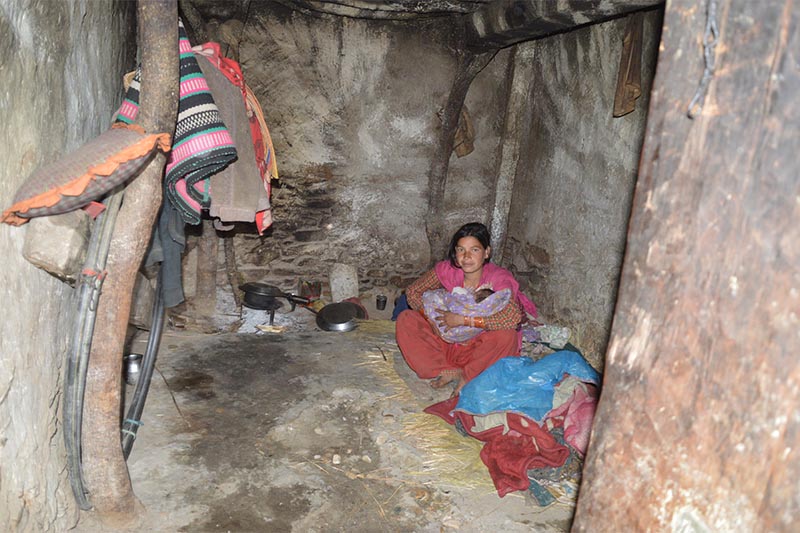 A lactating woman along with her baby sheltering in a cowshed in a village of Himali Rural Municipality-6, in Bajura district, on May 18, 2019. Photo: Prakash Singh/THT
BAJURA: Two of the five babies born to Pultisara Sarki died in a cowshed in Himali Rural Municipality-6 of Bajura district. The babies died due to the cold in the shed, Sarki shared. Likewise, a baby born to Rela Roka of the same village also died in a cowshed. Roka is not sure whether the cause of the infant's death was cold or other factors. She shared, "Majority of newly born babies die as the lactating mothers in the village are forced to take shelter in cowsheds for at least a month. The condition of lactating mothers in Humla is not very different. Dudhari Dhami of Maila in Tajakot Rural Municipality in the district said two of her three children died in a shed where she was forced to take shelter after delivering babies. She argued that both mothers and their babies pose risk of death in a shed. Auxiliary Nursing Midwife (ANM) at Rugin Health Post in Bajura, Prem Kala Malla agrees that the child fatality rate was higher in rural areas as the lactating mothers were forced to take shelter in sheds outside their homes. She asserted, locals believed that families not sheltering the new mothers in a cowshed would be cursed. Data collected by the District Health Office (DHO) shows that among the children who died within 28 days of birth, majority were found being sheltered inside sheds. According to an officer at the statistic department of the DHO, Rugam Thapa, as many as 18 babies have lost their lives within 28 days of birth in the fiscal year 2074/75, 17 babies in 2073/74, 69 in 2072/73, 83 in 2071/72 and 24 in 2070/71. The DHO has pointed living in a cowshed as the cause of higher child fatality rate in Bajura.
#Bajura #new-born #cowshed #lactating mothers #new born fatality
You May Also like: