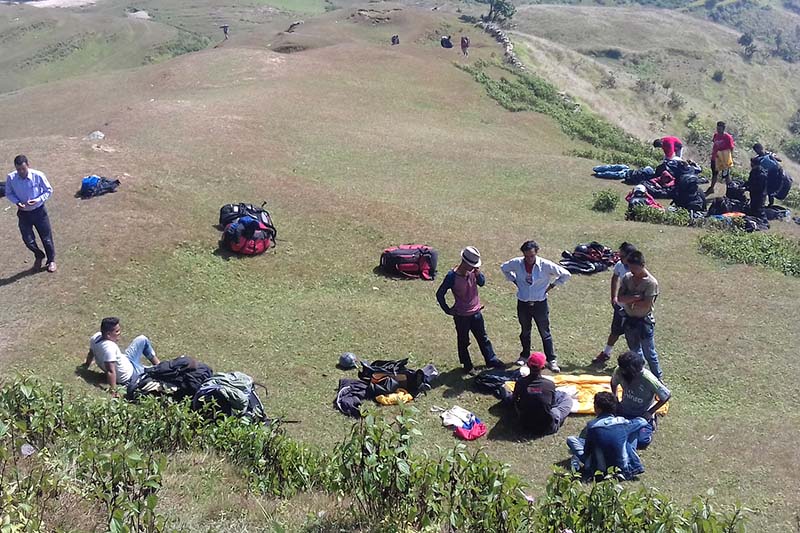 Aspiring paragliding pilots gather for test flight organised by the Babu Adventure School at Swarek Danda of Syangja district, on Wednesday, October 26, 2016. Photo: RSS
POKHARA: Paragliding has become one of the major attractions for both domestic and foreign tourists in the recent times in Nepal. Most of the tourists visiting Nepal to view the mountains come for paragliding, proprietor of the Flying Buddha Paragliding Pvt Ltd in Pokhara Taranath Pahari said. However, there are not sufficient pilots for the job, Pahari added. "There are around 62 companies that run paragliding in Pokhara and each company can keep six pilots, but there are only 180 Nepali and seven to eight foreign pilots." The prime season for paragliding in Pokhara is during the month of October and November, but in recent times it has been operational throughout the year. Meanwhile, with the start of paragliding in Nepal, the Babu Adventure School and the Blue Sky Flying School have gained permission to produce the necessary number of paragliding pilots. Babu Sunuwar, of the Babu Adventure, runs a school in Swarek Danda of Syangja while the Blue Sky has started schooling pilots in Bandipur of Tanahun. He there trains both Nepali and foreign aspirants under the government surveillance. Sunuwar said youth are getting attracted to choose paragliding pilots as their career options. It takes around two and a half years to qualify as a pilot in the business. The aspirants from 14 to 58 years of age have come to get trained as pilots for paragliding.
#Pokhara #Paragliding #foreign tourists #paragliders #Domestic tourists #Flying Buddha Paragliding #Swarek Danda
You May Also like: