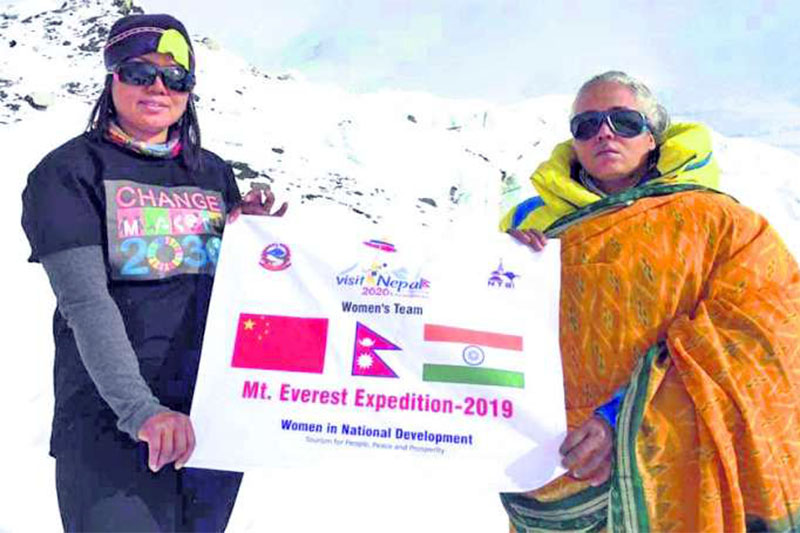 Kalpana Das (right) along with Kanchhi Maya Tamang at Everest base camp. Courtesy: Dreamers Destination Treks
KATHMANDU: A 49-year-old climber from Odisha, India died above the balcony area on Mt Everest this afternoon, bringing death toll to 14 on different mountains above 8,000 m in the spring climbing season. According to Meera Acharya, Director at the Department of Tourism, Kalpana Das, who was a member of the ‘Three Women Expedition’ locally managed by Dreamers Destination Treks, breathed her last near the balcony area while descending from the summit point. Kalpana along with Kanchhi Maya Tamang from Nepal and Liyamu Ma from China made it to the summit of Mt Everest at around 12:55 pm. “Das, who fell ill on the descent died near the balcony area,” Acharya quoted base camp officials as saying. Hailing from Dhenkanal district in Odisha, Das had already climbed different peaks in India, Nepal, Europe, South America and Australia. “Being a team leader of the Indian expedition, Das had scaled Mt Everest from Nepal side in 2008,” a record at the DoT shows. According to Gyanendra Shrestha, a liaison officer at the Everest base camp, Anjali S Kulkarni, 54, from Mumbai, India breathed her last at above Camp IV last night after she fell ill while descending from the summit point of Mt Everest. The incident occurred when Anjali along with her husband Sarad Kulkarni were returning from the summit point. The duo successfully made it to the roof of the world on Wednesday morning, he added. Kulkarni was part of the six-member expedition led by Rabindra Kumar.

According to the officials, the season witnessed at least 14 fatal incidents with five deaths on Mt Everest, three each on Mt Kanchenjunga and Mt Makalu as well as one each on Mt Lhotse, Mt Annapurna and Mt Cho Oyu till date.
#Mt Everest #Department of Tourism #Kalpana Das #Dreamers Destination Treks
You May Also like: