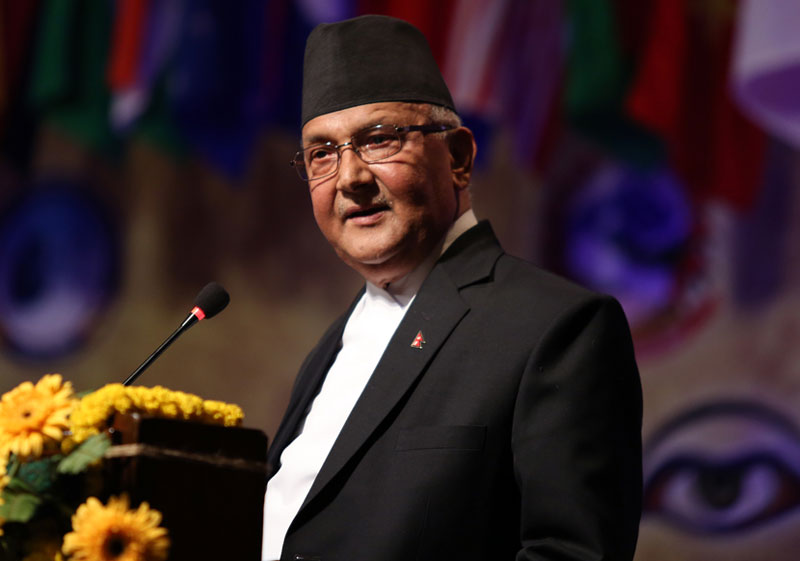 Prime Minister KP Sharma Oli addressing the International Buddhist Conference organised on the occasion of the 2560th Buddha Jyanti in the Capital on Thursday, May 19, 2016. Photo: RSS
BAGLUNG: CPN-UML Chairman KP Sharma Oli has said that the Constitution amendment bill registered in the Parliament would not be endorsed, reiterating it was against the country's interests. He was adamant that the proposed bill would not even be discussed in the Parliament. Oli was speaking on the occasion of the 8th Baglung district convention of the UML in the district. Oli also said the proposal was not acceptable to his party as it had been brought in a way that would 'harm' the country and its citizens. "The Constitution amendment is not the need of the hour at this time. The proposal that is designed to split Province No. 5 will disintegrate Nepalis," he said. On local body elections, the UML leader said all should go for the elections at the earliest and that there was not a link between the Constitution amendment and the polls. "The elections are a need of the country at this time. The Constitution has not barred it. The task of the Parliament is to make laws related to the elections, but not to amend the Constitution," he said. The convention that will conclude on Sunday will pick the next leadership of Baglung UML.
#CPN-UML #KP Sharma Oli #constitution amendment bill
You May Also like: