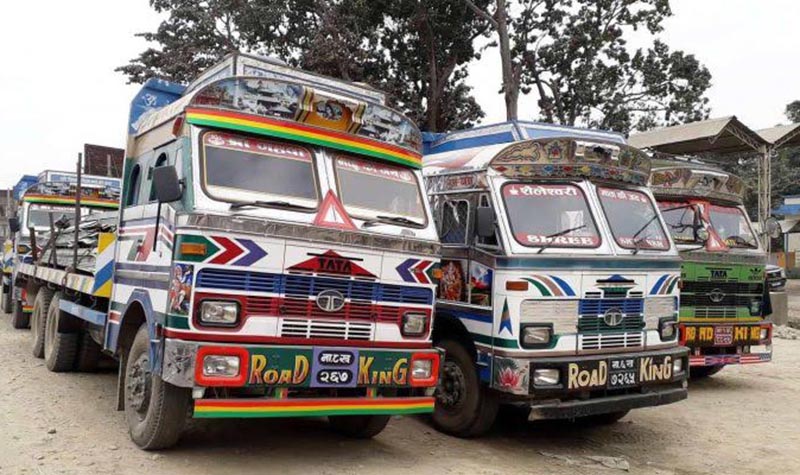 Overloaded trucks kept on the premises of Prvince 2 Traffic Police in Pathlaiya, Bara, on Monday. Photo: THT
Bara, December 17 Province 2 Traffic Police Office, Pathalaiya, took 12 trucks carrying load beyond the permissible limit under control in Pathalaiya, Bara, today. The trucks were heading to Chitwan from Bara carrying iron this morning. Traffic police said the trucks were carrying six to nine times more load than permitted by the load limit. Traffic Police Inspector Ripendra Singh said the trucks were sent to Birgunj-based Narayani Transport Management Office for further action. Inspector Singh said action was taken against as many as 843 trucks this fiscal. Of them, 550 were Indian trucks. According to transport regulation, permissible load limit for 10-wheeler trucks is 15.5 tonnes, for 12-wheeler 21 tonnes and for 14-wheelers 27 tonnes. Likewise, 18-wheeler trucks are permitted to carry load of up to 30 tonnes and 22-wheelers 35 tonnes. Singh said action would be taken as per the directive if trucks were found carrying loads beyond the set limits.
#Bara #Traffic Police Office #Pathalaiya #Overloaded trucks
You May Also like: