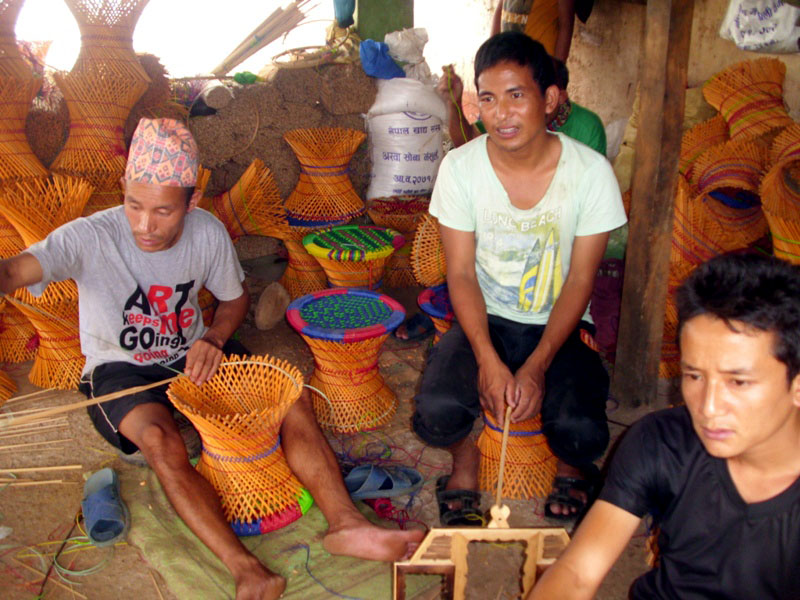 Panchthar jailbirds weave mudhas to spend their time in the jail on Saturday, August 13, 2016. Photo: Laxmi Gautam
PHIDIM: The Pancthar District Prison has been overcrowded, causing various problems for inmates to run their life smoothly. Over five times prisoners as many as its capacity are doing their time in the jail. The jailhouse has a capacity to house 25 prisoners including 20 men and five women. But, as many as 127 (114 men and 13 women), plus three children, are being kept in the jail, said Jailor Tek Nath Rimal. Because of the overcrowded mass, it is very difficult to eke out basic daily needs, he added. Meanwhile, the inmates often suffer from cold and various epidemics, as they too have to sleep on the floor for want of sufficient beds. The tension there rises to its peak every morning when everyone is in hurry to use toilets, Rimal added. There are just three toilets for the inmates. Though there is 10 ropani land in the name of Panchthar Prison, budget has not been allocated for maintenance of the building despite the countless requests to government, according to Chief of the Prison, Surendra Mukhiya. The jailhouse has not been renovated for last three decades, Mukhiya added. The jailbirds have been spending their time weaving dhaka and khandi clothes, and making mudhas (stools with nylon ropes and bamboo sticks).
#prison #Pancthar #Chief of the Prison
You May Also like: