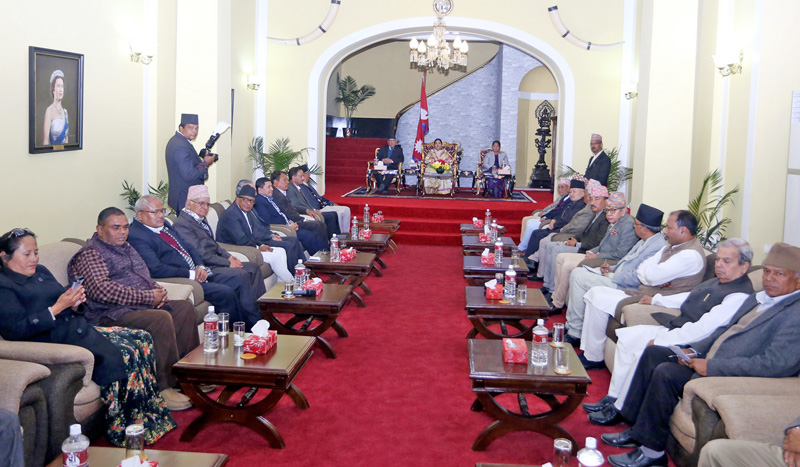 The head of state conveyed this message to the parties in an all-party meeting she had called at Shital Niwas. The meeting was attended by chiefs of political parties, including Prime Minister Pushpa Kamal Dahal.

The meeting that was called in the backdrop of CPN-UML’s continued obstruction of House proceedings against the constitution amendment bill lasted for four hours.

According to CPN-ML General Secretary CP Mainali, the president told the parties to forge consensus through dialogue on political issues. Mainali said the president reminded the parties of the significance of their unity and consensus to hold the three types of elections before January 22, 2018.

According to Mainali, PM Dahal and Nepali Congress President Sher Bahadur Deuba defended the constitution amendment bill, while CPN-UML Chair KP Sharma Oli denounced it, arguing that the bill was brought unilaterally in violation of the constitution and was not in the national interest. Oli said his party would continue obstructing the House proceedings till the amendment bill was withdrawn by the government.

General Secretary of National Madhes Socialist Party Keshav Jha said the bill was anti-national and his party would not support it.

According to Jha, NC President Deuba told the meeting that the government had not incorporated anything new in the bill and its contents were not different from the blueprint

of federal provinces which Oli and late Sushil Koirala had jointly submitted to the Constitutional Political Dialogue and Consensus Committee of the Constituent Assembly (on November 3, 2014).

Deuba also told the meeting that it was important to amend the constitution to take Madhesi parties on board and hold elections on time.

PM Dahal defended the bill, saying that the document had contents that the major parties had agreed on in the past.

The PM said that in the process of debate on the bill, amendments could be moved and parties could reach an agreement on contents of the bill. According to Jha, Tarai Madhes Democratic Party leader Mahantha Thakur said the parties’ had lost the confidence of Madhesi people, but if they continued to ignore Madhesis’ concerns, they would further alienate Madhes.

Chair of Federal Socialist Forum-Nepal Upendra Yadav told the meeting that those who were not ready to accept diversity of the country and federalism were anti-national.

Rastriya Prajatantra Party Chair Kamal Thapa urged the CPN-UML to soften its stance on issues raised by Madhesis and Janajatis and find a solution to political problems through dialogue.

Thapa reminded the UML of its argument last year when it told the agitating Madhesi parties to abandon their street protest and join the Parliament to find a solution to their issues. “Now it’s your turn to do what you had stood for in the past,” Thapa told the meeting.