Rape cases on the rise in Lamjung 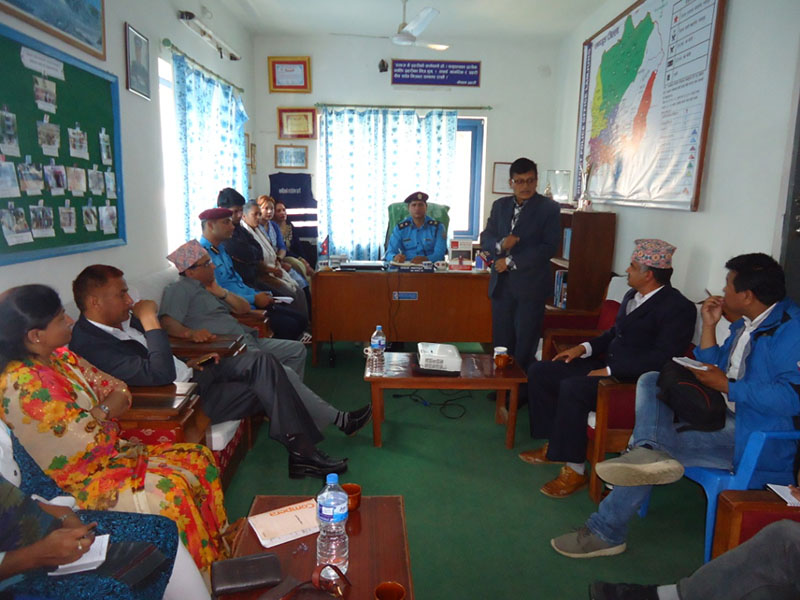 District stakeholders at an interaction programme on 'rape crime investigation and control campaign, 2074' organised by the District Police Office, in Lamjung, on April 10, 2018. Photo: Ramji Rana
LAMJUNG: Stakeholders have expressed concern over the increasing number of rape cases in Lamjung district in recent years. Statistics revealed that the incidence of rape has been higher this year compared to the last in the district. At an interaction programme of stakeholders under the 'rape crime investigation and control campaign, 2074' organised by the District Police Office, Lamjung, stakeholders expressed sorrow over the abnormal rise in the number of rape cases. As measures to tackle the issue, they suggested carrying out investigation and taking strict legal actions to bring the crime under control. District Judge Komal Prasad Acharya said, legal consciousness and information on action against perpetrators must reach the people to control the incidents of rape. Women Development Officer Bishnu Maya Poudel at the Women and Children Office in the district also reiterated that rape cases are increasing in the district. She added that victims, in recent times, have started talking about the problems faced by them; violence of some form or the other against girls and women are taking place in schools, offices, organisations, and industries among others. Chief at the Lamjung District Police Office, Deputy Superintendent of Police Padam Bahadur Bista, analysing the statistics of the past three years, also said that the incidence of rape cases has increased in recent years. He informed that eight cases of rape have taken place in the district in the current fiscal year, as of date. Likewise, 11 rape cases were reported in the fiscal 2073/74, whereas nine rape cases each had taken place in fiscal 2071/72 and 2072/73, according to DSP Bista. The DPO statistics indicate that in the current fiscal year, minor and teenage girls were victims in majority of the rape cases. The statistics state that girls under the age of 16 have been victims in all the rape incidents that occurred in the current fiscal year. Two girls under the age of seven, three of the age group 8-12, and three between 12-16 years were victims to the crime. Seven perpetrators involved in the crime were taken into police custody while one is still on the run. Police investigation has pointed lack of awareness on the part of parents and guardians, increasing modernisation, social media influences, use of mobile phones and internet as the major reasons behind the increasing cases of rape. Likewise, alcohol consumption and exposure to explicit online materials are other factors responsible for influencing perpetrators to carry out the crime, further informed DSP Bista.
#Lamjung #District Police Office #Women and Children Office #Teenagers #rape cases #Interaction #Minors #stakeholders #Girls #statistics #increasing
You May Also like: