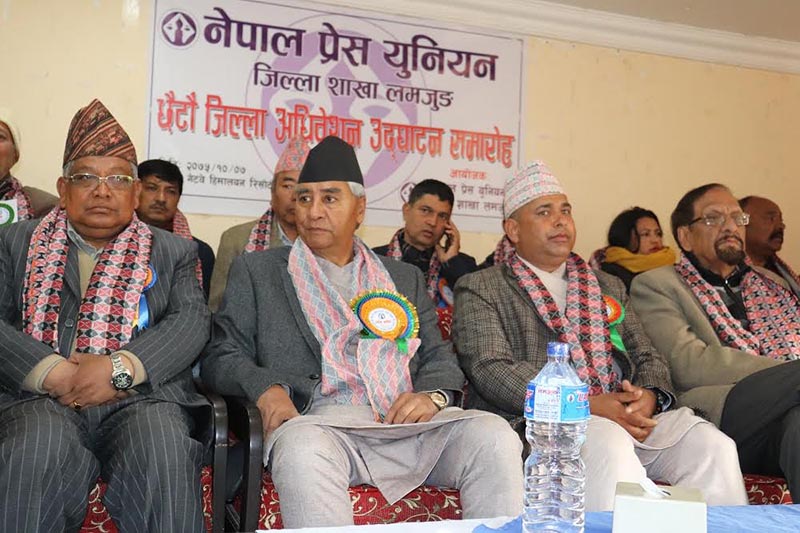 Nepali Congress President Sher Bahadur Deuba attending the sixth conference of Nepal Press Union Lamjung chapter, in Lamjung, on Monday, January 21, 2019. Photo: THT
Lamjung, January 21 Nepali Congress President Sher Bahadur Deuba today warned of an agitation against the incumbent government’s interventionist policy with regard to state organs and the media. Addressing the sixth District Conference of Nepal Press Union Lamjung chapter in the district, Deuba accused the government of meddling with the press and the bureaucracy. “The government is trying to take all state organs and the press under control. If it does not mend its ways, we shall launch an agitation against it,” he threatened. Stating that NC was in favour of free press, Deuba said intervention with the press was not acceptable to his party. “We stand by independent bureaucracy and press. We will be forced to hit the street if bureaucracy and press are meddled with,” he warned. In a different context, Deuba charged that all evidences pertaining to Nirmala’s rape and murder were destroyed to give immunity to the guilty. He flayed the government for failing to check the escalating incidents of murder and violence. NC central leader Ram Sharan Mahat accused the government of trying to impose totalitarianism in the country. “The government, despite enjoying two-thirds majority, has failed to meet people’s expectations,” he said.
#Nepali Congress #Sher Bahadur Deuba #government’s interventionist policy #agitation against government
You May Also like: