The farmers' due payment began as the sugar mill's management side deposited Rs 350 million in its account for clearing the outstanding amount. 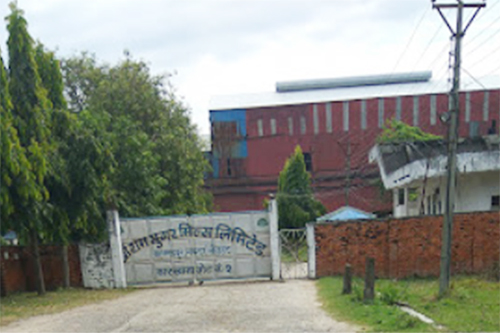 The sugarcane farmers and labourers at Shree Ram Sugar Mills Ltd based in Garuda Municipality were left in the lurch after the mill operators decided to close down the factory without arranging for their payment.

The sugarcane farmers had frequently appealed to the mill's management to pay their dues. However, when the mill operators did not agree to make the payment, Sugarcane Production Association, Rautahat's vice-chair Ram Pramod Yadav and 46 other farmers lodged a complaint with the District Police Office against the mill operators — Hitesh Golchha, Bishal Agrawal — and executive director Padmakanta Jha. Subsequently, police issued an arrest warrant against them in a fraud case, on Wednesday.

The sugar mill operators deposited a total of Rs 350 million in its account from which Rs 164,470,007 was transferred into the farmers' account after the arrest warrant was forwarded to district administration offices in all 77 districts urging the mill operators to present themselves before the Rautahat DPO, Rautahat District Administration Office (DAO) informed.

The amount was transferred into the farmers' accounts after police launched a search operation to find the sugar mill operators, according to Rautahat's Chief District Officer (CDO) Indra Dev Yadav. Four ministers including Minister for Home Affairs Ram Bahadur Thapa had decided to arrest the sugar mill operators and take action against them.

Narendra Thakur, farmer of Sangrampur said, "The sugarcane plantation which is a cash crop has turned as a debt crop for local farmers in Rautahat, Bara and Sarlahi. He lamented that the farmers were not sure as to how long they would have to wait to get paid even when they had to transport the sugarcanes to the sugar mill at their own expense.

Sugarcane farmers from Sarlahi and the adjoining districts started a protest in Kathmandu asking the government to help them recover their due payments from sugar mills.

After a week-long protest in December last year, the government had signed an agreement with the Sugarcane Farmer Struggle Committee on January 1 to recover their due payments within a month.