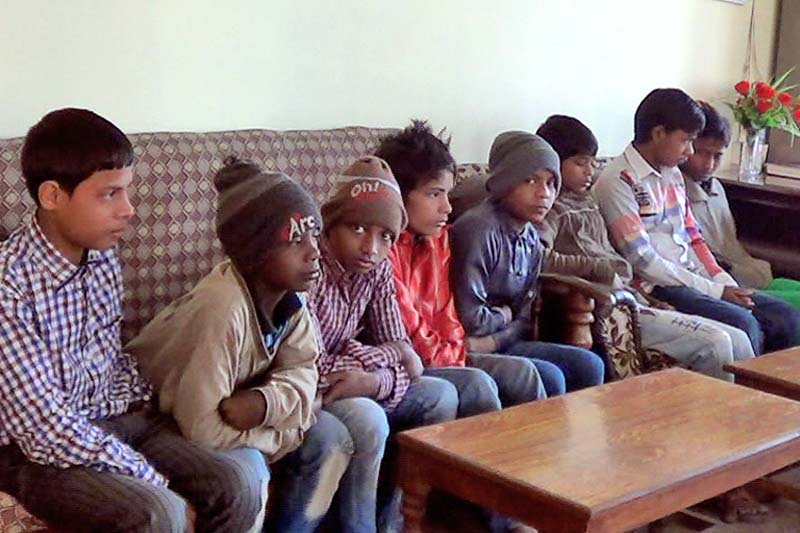 File - Child labourers rescued from Muzaffarpur of India sit in an office of the District Administration Office, Rautahat, on Tuesday, December 29, 2015. Photo: Prabhat Kumar Jha/ THT
KAKARBHITTA: As many as six Nepali children, who were stranded in Siliguri and New Jalpaiguri in the Indian state of West Bengal, have been rescued and brought to Nepal. With the initiatives of the District Women and Children's Office (DWCO) of Jhapa district, the six boys aged between 11 to 15 years were brought to Nepal on Wednesday night. The rescued children have been identified as Roshan BK of Sangrumba, Ilam district; Sagir Ansari of Janakpur, Dhanusa district; Milan Karki of Prithivinagar and Bibek Shah of Bhadrapur, both in Jhapa district; and two others - Sudeep Rai and Bhuwan Magar -  who are unable to give details of their home, according to the DWCO chief Indira Ojha. The Indian police personnel had kept the stranded children in a children's home in Silliguri before they handed them over to the DWCO. Meanwhile, the Jhapa-based Maiti Nepal has taken charge of caring the rescued children. The children will be sent to their home while Magar and Rai will be kept until the Office ascertains their home address, DWCO chief Ojha informed.
#Maiti Nepal #Jhapa #Kakarbhitta #Nepali children #District Women and Children's Office #Siliguri #Rescued Nepali children #DWCO #New Jalpaiguri
You May Also like: