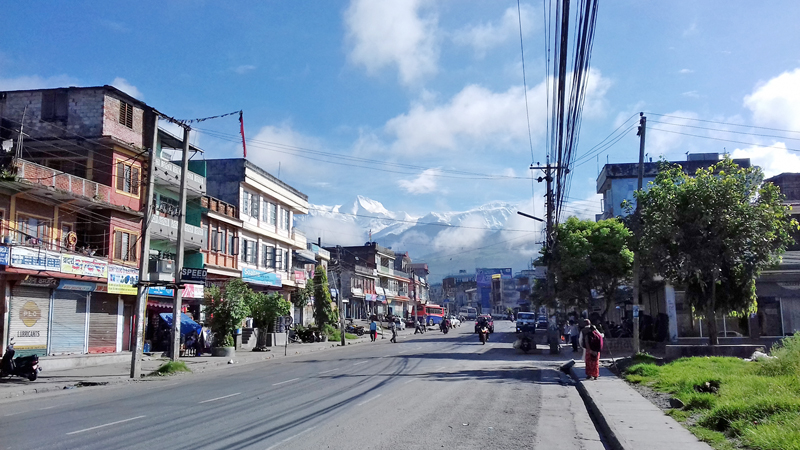 The Dhaulagiri Mountain Range as seen from Nayabazar of Pokhara, on Thursday, August 4, 2016. Photo: RSS
Pokhara, August 24 Increasing number of vehicles as well as the ever rising population have been causing environmental pollution in the tourist city of Pokhara. The lake city has become the most polluted city after Kathmandu due to escalating environmental pollution. Earlier, the government had formed a working team to carry out a study and suggest measures to manage the transport in Pokhara. The team had examined air pollution in five areas of the city. Dhiraj Pokhrel, general secretary of the Society for Legal and Environment Analysis and Development Research, who was assigned the responsibility of examining air quality in the city, said Pokhara’s air quality was terrible. Since Pokhara is a bowl-shaped Valley, it takes a long time for the air to exit the city. The research centre had collected air samples from Prithvi Chowk, Mahendrapul, Halnachowk, Harichowk and Nadipur areas. According to the study, high content of carbon mono oxide has been found in places with high pressure of vehicles. Similarly, dust particles weighing below 10 micro grams were also found in excessive amount. As the air in Pokhara contains sulfur-dioxide and nitrogen oxide, immediate measures need to be taken to reduce air pollution. The team has recommended pollution-free vehicles to curb pollution in the Lake City. The team has submitted a 16-point report to the Ministry of Physical Infrastructure and Transport. They have suggested establishing an Air Quality Monitoring Centre to inspect air quality in the city at the earliest. Other recommendations include implementation of green stickers on vehicles, no permission to new vehicles and promoting electric, gas, and solar vehicles. A member of the working team, Gandhiraj Giri, said his team had also suggested adding large vehicles with many seats.
#Pokhara #air pollution #Air Quality Monitoring Centre
You May Also like: